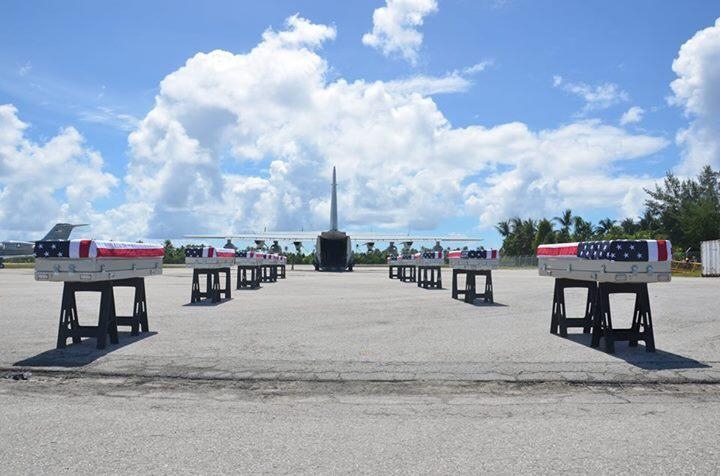 Rows of American flag-draped coffins rested on pavement cracked by the relentless heat of a tropical summer sun. For decades, the Marines inside the caskets had been deemed "unrecoverable," lost to time, history and the families who never forgot them.

On Saturday -- after 10 years of research and thanks to the determination of one man to uphold the military tradition of leaving no man behind -- the remains of nearly 40 Marines began their final journey home.

It's the end of a story that began more than 70 years ago on "one square mile of hell." That's how Marines who stormed the small, remote Pacific island chain of Tarawa on Nov. 20, 1943 described the atoll.

As the sun set that day on beaches ravaged by intense American aerial assaults, the men of the 2nd Marine Division went ashore in rubber boats and amphibious tractors, not expecting much resistance from the Japanese forces left defending the island.

It was a fatal mistake. The island was so heavily fortified with concrete bunkers that a Japanese commander boasted it would take a million men a hundred years to take it. Marines completed the job in just three days, but not without heavy losses.

More than 1,200 Marines died on Tarawa, and were hastily buried in makeshift graves as the war effort marched on. Hundreds are still buried there today in what is now the tiny Republic of Keera-Bass, under yards, trash pits, even pigsties.

"This isn't really the context that people expected to rest eternally, you know, if they were to die in the line of duty for the country," Mark Noah told CBS News when we visited the island with him last spring.

Noah is the founder of History Flight, a non-profit charity that has recovered the remains of more than 100 American service members who died in World War II. A commercial cargo pilot and antique plane enthusiast, Noah began raising money for the charity 10 years ago by offering rides on WWII airplanes in exchange for donations.

One set of remains has already been positively identified as 1st Lt. Alexander Bonnyman Jr., whose actions in the Battle of Tarawa earned him a posthumous Medal of Honor.

"These brave men made the ultimate sacrifice over 70 years ago," Baker said, "and they deserve the best possible repatriation that we can give them."

"I was very pleased to learn of the discovery of the remains of our Marines on the island of Tarawa -- one of our most significant and contested battles," Commandant of the Marine Corps, Gen. Joseph Dunford, said in a statement. "The lessons learned at Tarawa paved the way for our success in the Pacific campaign and eventual end to the war. We look forward to their return home."

The Defense POW/MIA Accounting Agency (DPAA) took custody of the remains in a repatriation ceremony in Tarawa on Saturday before transporting them to a lab in Hawaii for identification. Once identification is complete, the remains will be returned to their families for burial with full military honors.

For Noah, it's the culmination of a process that has been a worthy, but challenging endeavor.

At the National Museum of the Marine Corps outside Washington on Friday, just hours before his team repatriated 40 WWII Marines from Tarawa, Noah received special recognition for his work: He became a Marine.

Noah is only the 94th person to be awarded the title since the Marines began bestowing it in 1992 to recognize civilians who make extraordinary contributions to the Corps. Other recipients include several U.S. Senators, Chuck Norris, Gary Sinise and Bugs Bunny.

Noah plans to continue his recovery mission on Tarawa and urges the family members of individuals still unaccounted for from the battle of Tarawa to contact History Flight at www.historyflight.com.