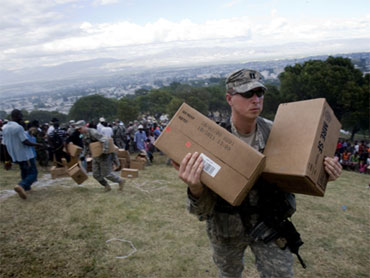 Thousands of U.S. Marines were expected off the shore of this crumbled capital city Monday to help relief organizations get supplies to Haitian earthquake survivors who questioned foreigners, soldiers and God about aid yet to arrive.

Some 2,000 Marines were to arrive on Monday, according to U.S. military commanders, reinforcing 1,000 U.S. troops already on the ground. Former President Bill Clinton, the U.N. special envoy for Haiti, was expected to visit the country and meet with President Rene Preval.

The troop increase and an expected request to the U.N. for more peacekeepers were coming a day after sporadic violence and looting in Port-au-Prince underscored how an uptick in water and food deliveries still fell far short of overwhelming demand.

"We don't need military aid. What we need is food and shelter," one young man yelled at U.N. Secretary-General Ban Ki-moon during his visit to the city Sunday. "We are dying," a woman told him, explaining she and her five children didn't have any food.

"We've been ordered not to shoot at people unless completely necessary," said Pierre Roger, a Haitian police officer who spoke as yet another crowd of looters ran by. "We're too little, and these people are too desperate."

A reliable death toll may be weeks away, but the Pan American Health Organization estimates 50,000 to 100,000 died in Tuesday's 7.0-magnitude quake. Haitian officials believe the number is higher. Survivors live outside for fear of unstable buildings and aftershocks.

On the streets, people were still dying, pregnant women were giving birth and the injured were showing up in wheelbarrows and on people's backs at hurriedly erected field hospitals.

On Sunday, supplies of water made it to more people around the capital and while fights broke out elsewhere, others formed lines to get supplies handed out by soldiers at a golf course. Still, with a blocked city port and relief groups claiming the U.S.-run airport is being poorly managed, food and medicine are scarce. Anger mounted hourly over the slow pace of the assistance.

"White guys, get the hell out!" some survivors shouted in the city's Bel-Air slum, apparently frustrated at the sight of foreigners in their streets who were not delivering help.

At a destroyed nursing home, a 71-year-old resident said she could hold on for another day.

"Then if the foreigners don't come (with aid)," said Jacqueline Thermiti, "it will be up to baby Jesus." Elderly Haitians Waiting to Die

Improbably, five days after the magnitude-7.0 quake struck, more survivors were freed from under piles of concrete and debris.

At a collapsed supermarket, rescuers late Sunday pulled a 30-year-old man and a 40-year-old woman from what had been its fourth floor. Officials said both were in stable condition, able to survive for so long by eating food trapped along with them.

"She's responding, she's with it. So she's in very good shape for somebody who's been basically trapped for five days," said Capt. Joseph Zahralban, a South Florida rescue team leader.

Earlier in the day, a policeman reported three other people had been rescued from market's rubble. Emergency teams said they were still hopeful of finding more possible survivors in other parts of the damaged store.

At the U.N. headquarters destroyed in the quake, rescuers lifted a Danish staff member alive from the ruins, just 15 minutes after Secretary-General Ban visited the site, where U.N. mission chief Hedi Annabi and at least 39 other staff members were killed.

U.N. spokeswoman Elisabeth Byrs said it was possible people could survive until Monday, adding to the 70 lives saved by 1,700 rescue workers since Tuesday's quake,

"There are still people living" in collapsed buildings, she told The Associated Press. "Hope continues."

The U.N. World Food Program was on target to reach more than 60,000 people Sunday, up from 40,000 on Saturday, spokesman David Orr said. U.N. officials said they must raise daily deliveries to 2 million within a month.

But the aid group CARE had yet to set a plan for distributing 38 tons of high-energy biscuits in outlying areas of Haiti, CARE spokesman Brian Feagans said Sunday. He did not say why.

The Geneva-based Doctors Without Borders said bluntly: "There is little sign of significant aid distribution."

The aid group complained of skewed priorities and a supply bottleneck at the U.S.-controlled airport. Doctors Without Borders spokesman Jason Cone said the U.S. military needed "to be clear on its prioritization of medical supplies and equipment."

The on-the-ground U.S. commander in Haiti, Lt. Gen. Ken Keen, acknowledged the bottleneck problem. "We're working aggressively to open up other ways to get in here," he said on NBC's "Meet the Press."

Part of that will be fixing Port-au-Prince's harbor, rendered useless for incoming aid because of quake damage. The White House said Sunday that the U.S. Coast Guard ship Oak had arrived and would use heavy cranes and other equipment to make the port functional.

During Mass outside the ruins of the Port-Au-Prince cathedral, the Rev. Eric Toussaint preached of thanksgiving to a small congregation of old women and other haggard survivors assembled under the open sky.

"Why give thanks to God? Because we are here," Toussaint said. "What happened is the will of God. We are in the hands of God now."

Others said their faith had been shattered.

"How could He do this to us?," cried Remi Polevard, who said his five children lie beneath in the rubble of a home near St. Gerard University. "There is no God."