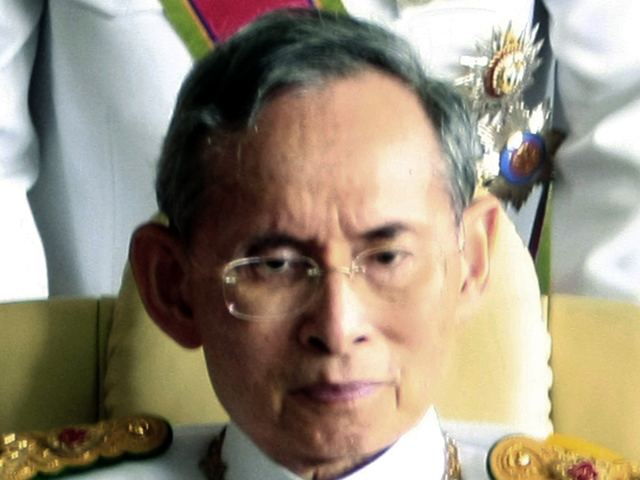 BANGKOK - Thai authorities said Friday they arrested an American citizen on charges he insulted the country's monarchy, in part by posting a link on his blog four years ago to a banned book about the Southeast Asian nation's ailing king.

The man is also suspected of translating, from English into Thai, portions of "The King Never Smiles" — an unauthorized biography of King Bhumibol Adulyadej — and posting them online along with articles he wrote that allegedly defame the royal family, said Tharit Pengdith, who heads the Department of Special Investigation, Thailand's equivalent of the FBI.

The American has denied the charges, according to the Thai-language prachatai.com news website, which tracks cases of lese majeste, as the crime of insulting the monarchy is known.

The 54-year-old Thai-born man lived in the U.S. state of Colorado for around 30 years before returning recently to Thailand for treatment for high blood pressure and gout, the website said. If the allegations are true, the infractions would have been committed while he lived in America — where they are legal — raising concern about the reach of Thai law and how it is applied to Thai nationals and foreign visitors.

Tharit said the man's Thai name was Lerpong Wichaikhammat. Walter M. Braunohler, the U.S. Embassy spokesman in Bangkok, identified the American as Joe Gordon and said a consular officer visited him on Friday morning. He declined comment further, saying only that officials were following the case "very closely."

"We're still looking into what the exact charges are," Braunohler told The Associated Press.

Thailand is a constitutional monarchy but has severe lese majeste laws that mandate a jail term of three to 15 years for any person who "defames, insults or threatens the king, the queen, the heir to the throne or the Regent."

Critics say the lese majeste laws — used with alarming frequency over the last several years — are often a weapon of political harassment and calls have grown recently to amend or abolish them.

Thai-based media routinely self-censor coverage of the royal family, but the Internet has tested the taboo. Thai authorities have responded by trying to block thousands of websites considered subversive, arguing that defending the monarchy is a priority.

Tharit said the man was arrested Tuesday and is facing charges that include inciting public unrest and violating Thailand's Computer Crimes Act. Gordon appeared before a Thai court Thursday, which denied him bail.

A DSI spokeswoman, speaking on customary condition of anonymity, said the American was arrested in the northeastern province of Nakhon Ratchasima and is being held in a Bangkok prison.

Praachatai.com said police arrested the man at his home and seized a computer and cell phone.

Sensitivity over criticism of the monarchy has increased in recent years as the poor health of the country's 83-year-old king has elevated concern about a smooth succession. At the same time, sharp partisan political battles in the wake of a 2006 military coup have unleashed unprecedented questioning of established institutions, including the palace.

Thailand's freedom of speech reputation has taken a battering in recent years, as successive governments have tried to suppress the opposition. Its standing in the Press Freedom Index issued by the Paris-based group Reporters Without Borders slid to 153 last year from 65 in 2002, when the ratings were initiated.

The number of lese majeste cases has grown dramatically in recent years. Between 1990 and 2005, an average of five per year made their way through the Thai court system. Since then, however, there have been at least 400 cases — an estimated 1,500 percent increase, according to David Streckfuss, an American scholar who wrote a recent book studying the harsh laws called "Truth on Trial."

In March, a Thai court sentenced Thanthawut Taweewarodomkul — the operator of an anti-government website — to 13 years on charges of defaming the monarchy and three more years for violating the Computer Crime Act. The 38-year-old ran a website affiliated with the anti-government Red Shirt movement whose aggressive street protests last year deteriorated into violence and were quashed by the army.

The 2007 Computer Crime Act addresses hacking and other traditional online offenses, but also bars the circulation of material deemed detrimental to national security or that causes panic. It carries a penalty of up to five years' imprisonment and a fine of 100,000 baht ($3,285).