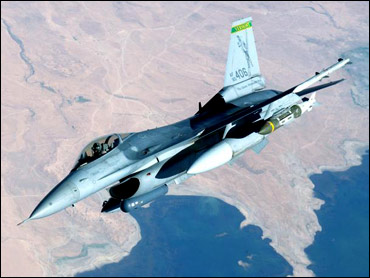 Brand new, U.S.-manufactured, F-16 fighter planes are set to fly in to Pakistan on Saturday for the first time since new F-16s were bought by the country in the early 1980s, in an example of a relationship that has hovered between close proximity to periods of cooling off.

But the history of the supply of F-16s to Pakistan has been troubled. After supplying 40 new F-16 fighter planes to Pakistan in the 1980s to boost Islamabad as a frontline state against the occupation of Afghanistan by the former Soviet Union, the U.S. slapped military and economic sanctions against Pakistan in 1990 to punish Islamabad for attempting to manufacture nuclear bombs.

Those sanctions failed to stop Pakistan from continuing with its nuclear weapons development program and carrying out its first set of nuclear tests in 1998.

However, relations between Pakistan and the U.S. were revived after the Sept. 11, 2001 terrorist attacks forced the two countries to join hands against al Qaeda and the Taliban.

In the past decade, Pakistan has been supplied with used F-16 fighter planes by the U.S., to help the Pakistan Air Force (PAF) carry out its operations against Al-Qaeda and the Taliban, but Saturday's arrival of the F-16s will be the first time that new planes of this particular type will be inducted since the early 1980s.

"This is a milestone event. We are very pleased to finally see the US share some of its modern age technology with Pakistan," said a PAF official who spoke to CBS News on condition of anonymity.

But analysts warned that many Pakistanis still remain skeptical of ties with the U.S. in view of the memories of past sanctions.

"You travel around this country and you realize how emotional this issue continues to be," Anjum Rahman, a TV show host for Pakistan's Express TV channel told CBS News. "People still see the suspension of future F-16 deliveries from 1990 onwards "as an era that brings back unfortunate memories."

On the streets of Islamabad, Pakistan's capital city, there are many who remember the Pak-U.S. history of ties in relation to the F-16s.

"In the 1980s, images of the F-16 were painted on so many buses and trucks as Pakistan celebrated the arrival of the world's most modern jet fighter. Even if the Americans now give us new planes, how will anyone erase the memories of an entire nation?" asked Barkat Khan, an Islamabad school teacher.

While PAF officials are preparing to receive delivery of the new planes enthusiastically, their ability to tackle skepticism on the streets is limited. "We can only perform the best possible service but we can't tell people, how and what to think," concluded the PAF official.