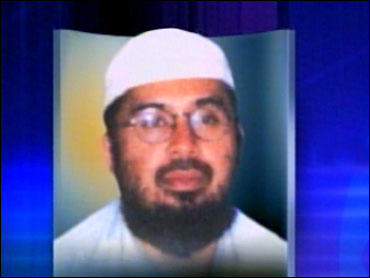 The arrest of al Qaeda's purported chief representative in Southeast Asia will help authorities in their fight against terrorism in Asia and slow the flow of terrorist funds in the region, Deputy U.S. Secretary of State Richard Armitage said Friday.

The White House announced the arrest Thursday of Hambali, whose real name is Riduan Isamuddin. The Bush administration said Hambali was a known killer and close associate of Sept. 11 mastermind Khalid Shaikh Mohammed.

Hambali is thought to be al Qaeda's bombing mastermind and operational planner in Asia. He is believed to have planned last year's Oct. 12 bombings on the Indonesian resort island of Bali that killed 202 people.

Armitage said Hambali's capture would also help slow up the flow of terrorist funds in Asia.

"It makes them have to come up with workarounds to their normal facility for passing money and that's a good thing because it possibly could show up more readily to us," he said.

Armitage was cautious in giving details surrounding Hambali's capture because it could be a chance "to wrap up more of his comrades and we'd love the opportunity to do so."

The Nation newspaper in Thailand reported Hambali was arrested early this week in the central Thai town of Ayutthaya on suspicion of plotting to stage a terrorist attack during the Asia Pacific Economic Cooperation leaders summit in October.

Armitage said it had been "a pretty good week for the antiterrorist coalition," but cautioned that the war against terrorism would be long and hard.

"This is not a war that will be over in the short term. It's going to be long, it's going to be continuously neuralgic for some time and we have to fight it on all fronts," he said.

Armitage was in Australia this week for talks on terrorism and regional security with Prime Minister John Howard and to attend a meeting of a private group called the Australian-American Leadership Dialogue, organized by Australian and U.S. business people.