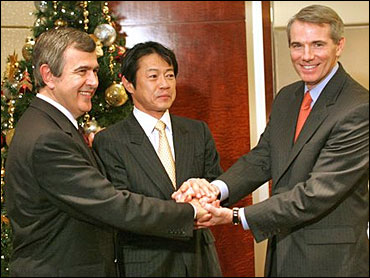 "We are ready for that market to open," Johanns said during a press conference in Hong Kong at the World Trade Organization meeting.

Earlier Monday, the Japanese government announced that it would lift a ban on U.S. beef imports dating from December 2003 after the discovery of a case of mad cow disease in a U.S. herd.

The moves resolve a trade dispute that had marred relations between the two allies.

Johanns said the United States would amend its rules Monday to allow imports of whole cuts of Japanese boneless beef under conditions that safeguard against the introduction of mad cow disease into America.

Johanns said Japanese beef could be in U.S. supermarkets within 10 days.

"We considered the safety of Japanese consumers and ... came up with a result," said Japan's farm minister, Shoichi Nakagawa, as he stood shaking hands with Johanns on Monday evening.

"You shouldn't talk about me that way in front of reporters," joked Nakagawa, Japan's minister of agriculture, forestry and fisheries.

Meanwhile, he said Japanese officials would leave for the United States, probably on Tuesday, to inspect beef facilities, a preliminary to resuming U.S. imports into Japan. He said American beef would likely be shipped to Japan within the next 10 days.

"I don't think either side is anticipating any surprises at all, and we should be able to implement this very, very quickly," Johanns said.

The Japanese ban on U.S. beef cut off American ranchers from what was once their most lucrative overseas market. Some U.S. lawmakers threatened sanctions unless Tokyo resumed imports.

United States Trade Representative Rob Portman touted the resumption of imports as the result of dogged trade negotiations between the countries.

"Our farmers and ranchers deserve to have their products be on the shelves of Japan, and that will now be able to happen," he said.

Mad cow disease — bovine spongiform encephalopathy, or BSE — is known to spread to cows that are fed with the remains of other cattle infected with the deadly disease.

Beef infected with mad cow disease is also thought to cause a fatal brain disorder in humans, Creutzfeldt-Jakob disease, that has killed more than 150 people, mostly in Britain, since the 1990s.