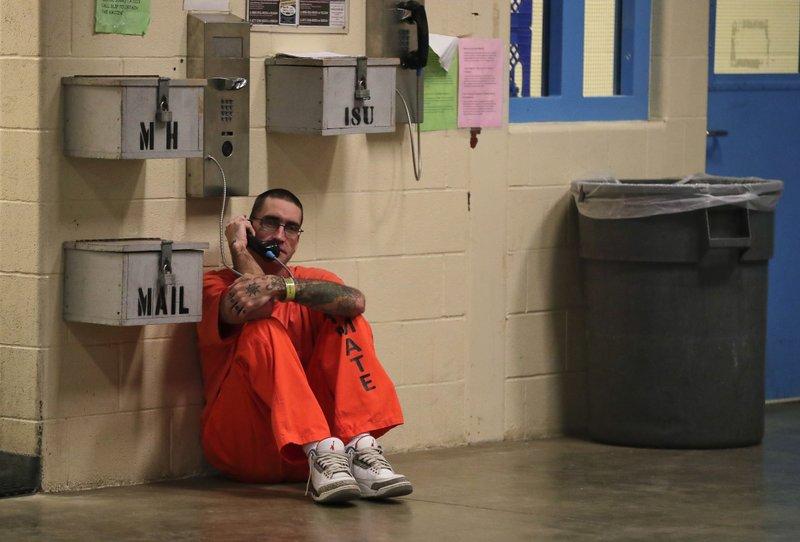 ALBANY, N.Y. — The military veterans playing cards in the Albany County jail wear the same orange uniforms as everyone else, with "INMATE" printed down the legs. But their service offers one distinct privilege: a special cellblock where they can work through problems they often share, such as substance use and post-traumatic stress disorder.

"It's not just us and our thoughts all day," says 31-year-old Navy veteran James Gibson, who was serving a 60-day criminal contempt sentence. "Everybody who's been in here has been in the service. So we can all relate to at least that."

Such "veteran pods" are becoming an increasingly common part of state and county lockups as the criminal justice system focuses more on helping troubled former service members. Veteran inmates are more likely to have reported mental health issues, particularly PTSD, according to a snapshot of the prison population by the Bureau of Justice Statistics.

Nationwide, veterans accounted for 8 percent of all inmates, and there are at least 86 prisons and jails with designated veterans' housing, according to federal government statistics. Many of the programs were started in the last five years.

Cell blocks for veterans are an increasingly common feature of state and county lockups as the criminal justice system focuses on troubled former service members. Nationwide, there are 86 prisons and jails with designated veterans' housing. (Jan. 10)

Some of the half-dozen veterans' dorms in Florida prisons feature daily flag raisings or monthly formations. Others, like Albany, tend to avoid military trappings. The San Francisco Sheriff's Department offers yoga and meditation and works with a local veterans treatment court. But their common aim is to create an esprit de corps and a "safe space" to help veterans deal with their issues and reintegrate into society.

Sixty-two-year-old Army veteran Roberto James Davis said a two-month stay in veterans housing at San Bruno in the San Francisco Bay area in 2016 helped him change his mindset after decades of arrests and substance use. He now has steady work as a truck driver.

"I really started listening this time around," Davis said. "I was determined that if I got another shot I was going to make the most of it. And I have."

Albany's pod, a Spartan common area flanked by two stories of single-bunk cells, recently housed about a dozen men who served in different branches and in different decades stretching back to the Vietnam War.

But for the military branch emblems on a far wall, it looks like any jail block. The difference here is that the veterans receive intensive counseling and help from the nonprofit group Soldier On.

On a recent morning, 10 men gathered around the pod's bolted-down tables and drew pictures representing what they were doing in past years. The exercise helped them reflect on the choices they made that eventually landed them in jail.

"I've held a lot of conversation — good conversations — with some of you guys," Wesley Merriwether, 23, said during a recent morning group session. "Like I said, I'm young I can't give you much advice, but the advice I can give you: Just keep your heads up."

Inmates and officials say the Albany pod is cleaner and less troublesome than other tiers. When a guard was attacked here in 2016 by an inmate from another unit, the pod inmates ran from across the common area to the guard's aid.

"We send all these young men and women overseas and when they come back, a lot of them with PTSD, domestic violence, drug issues," said Albany County Sheriff Craig Apple, who started the veterans pod more than three years ago. "And I just felt we could have treated them better or done something for them."

Apple said 6 percent of the roughly 331 participating veterans in Albany over the years have returned to jail, far better than the typical jail recidivism rates of more than 40 percent.

Army veteran Lance Shaver talks on the phone inside the veteran's pod at the Albany County Correctional Facility.

It helps that Soldier On also provides post-release services like housing. So when Tommy Hartmann was released from the Albany jail last year after 90 days he had a place to go. The 29-year-old Army veteran moved into Soldier On's transitional housing in Leeds, Massachusetts.

He also got a job with Soldier On, on the resident staff. When the group helped serve a holiday meal recently, Hartmann returned to his old block to chat up inmates he knew.

This time he wore khakis and a tie. And he got to go home at the end of the night.

"They set me up to succeed when I got out," Hartmann said before his visit. "Rather than just sitting on the tier, playing cards, watching TV, doing pushups, whatever, I was doing positive stuff toward my recovery and becoming a better part in society."