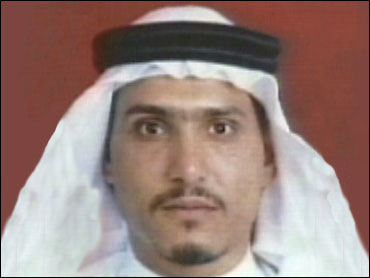 The U.S. military said the man claiming to be the new al Qaeda in Iraq leader is Abu Ayyub al-Masri, an Egyptian with ties to al Qaeda's No. 2 leader.

Maj. Gen. William Caldwell, a U.S. military spokesman in Baghdad, said al-Masri apparently is the same person as a man identified by the nom de guerre Abu Hamza al-Muhajer who has claimed to have succeeded Abu Musab al-Zarqawi and vowed to avenge him in threatening Web statements in recent days.

The Afghanistan-trained Al-Masri, an explosives expert, was a key figure in the al Qaeda in Iraq network and was long responsible for facilitating the movement of foreign fighters from Syria into Baghdad, Caldwell said at a news conference.

He has been a terrorist since 1982, "beginning with his involvement in the Egyptian Islamic Jihad, which was led by (Osama bin Laden's deputy Ayman) al-Zawahri," Caldwell said.

The spokesman added that raids in April and May in southern Baghdad recovered material that confirmed his high-level involvement in the facilitation of foreign fighters.

"Al-masri's intimate knowledge of al Qaeda in Iraq and his close relationship with (al-Zarqawi's) operations will undoubtedly help facilitate and enable them to regain some momentum if in fact he is the one that assumes the leadership role," Caldwell said.

He said, however, that al-Masri's ability to exert leadership over al Qaeda cells remained unclear and there were other "al Qaeda senior leadership members and Sunni terrorists" who might try to take over the operations.

Caldwell singled out Abu Abdul-Rahman al-Iraqi, who in the past had been identified as al Qaeda in Iraq's deputy leader in statements by the group, and Abdullah bin Rashid al-Baghdadi, the leader of the Mujahedeen Shura Council, five allied groups in the Sunni Arab-dominated insurgency.

Meanwhile, Prime Minister Nouri al-Maliki released documents that he says show that al-Zarqawi planned to try and destroy the relationship between the United States and its Shiite allies in Iraq and help start a war between America and Iran, according to what appeared to be a summary of an al Qaeda in Iraq document.

"Now we have the upper hand," National Security Adviser Mouwafak al-Rubaie said, speaking in English and Arabic at a news conference in Baghdad. "We feel that we know their locations, the names of their leaders, their whereabouts, their movements, through the documents we found during the last few days."

A U.S. military spokesman in Baghdad, Maj. Gen. William Caldwell, said the document had in fact been found in a previous raid as part of an ongoing three week operation to track al-Zarqawi.

"We can verify that this information did come off some kind of computer asset that was at a safe location," he said. "This was prior to the al-Zarqari safe house."

He added that there "was a series of targets that helped us find the location ... the authenticity is that it came after one of those targets and we know for certain."

Caldwell added that 452 raids have been carried out since al-Zarqawi's death, and 104 insurgents have been killed. He said 255 of the raids were joint operations, while 143 were carried out by Iraqi forces alone, leading to the discovery of 28 significant arms caches and the captures of 759 "anti-Iraqi elements."

One document said the U.S. military's program to train Iraqi security forces to replace American troops was working, according to the announcement.

"Generally speaking and despite the gloomy present situation, we find that the best solution in order to get out of this crisis is to involve the U.S. forces in waging a war against another country or any hostile groups," the document said, as quoted by al-Maliki's office.

According to the document, insurgents were being weakened by operations against them and by their failure to attract recruits. To give new impetus to the insurgency, they would have to change tactics, it added.

"We mean specifically attempting to escalate the tension between America and Iran, and American and the Shiite in Iraq," it said, especially among moderate followers of Grand Ayatollah Ali al-Sistani.

"Creating disputes between America and them could hinder the U.S. cooperation with them, and subsequently weaken this kind of alliance between Shiites and the Americans," it said, adding that "the best solution is to get America involved in a war against another country and this would bring benefits."