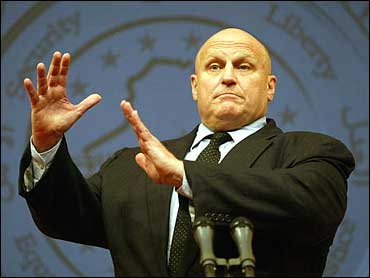 A senior U.S. official insisted Saturday that the U.S. military has the upper hand in escalating war in Iraq, on a day when two paratroopers died in a roadside ambush and the International Red Cross said it was closing two main offices due to deteriorating security.

Deputy Secretary of State Richard Armitage described Iraq as a "war zone," but noted that "we have the momentum in this process."

"I'm absolutely convinced we have a very solid plan to go out and get these people who are killing us and killing Iraqis," he told reporters during a visit to Iraq.

The sharp rise in the number of attacks against the troops of the U.S.-led coalition and their allies in the Iraqi security services, and the guerrillas' apparent ability to strike at will, has prompted fears that the initiative in the conflict is slipping from the coalition's hands.

During a news conference in the heavily guarded compound housing the Iraq's U.S.-led administration, Armitage appeared anxious to ease such fears.

"I'm pretty convinced after this short visit ... that we will take this fight to the enemy," he said.

Later Saturday, detonations were heard in Baghdad. An Iraqi police officer, Maj. Kadhim Abbas Hamza, said a mortar shell exploded in the yard in front of the main railway station and there were no casualties.

At the same time, coalition troops blocked traffic across the Jumhuriya Bridge near the U.S. command compound known as the "Green Zone." For the first time since the end of major combat in May, U.S. jets and helicopters circled overhead through the night sky with their navigation lights turned off.

Two soldiers of the 82nd Airborne Division died Saturday when a homemade bomb exploded beside their vehicle about in Fallujah, a center of Sunni Muslim resistance 40 miles west of Baghdad, the military said.

Their deaths brought to 34 the number of American soldiers who have died in Iraq in November as resistance has escalated during the Islamic holy month of Ramadan. The death toll for the week was by far the largest for any seven-day period since President Bush declared the end of major combat on May 1.

In Geneva, the International Red Cross said Saturday it was temporarily closing its offices in Baghdad and Basra because of the security situation. The Red Cross had planned to cut back on its foreign staff of 30 people after the Oct. 27 truck-bombing at its Baghdad office but wanted to keep the offices open with reduced staff.