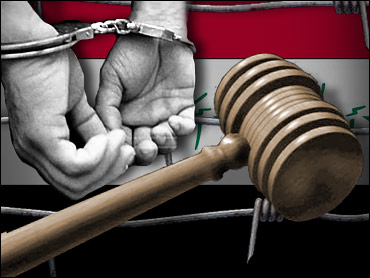 The U.S. military in Iraq has detained five Americans for suspected insurgent activity, Pentagon officials said Wednesday. The five have not been charged or had access to a lawyer, and face an uncertain legal future.

Pentagon spokesman Bryan Whitman declined to identify any of them, citing the military's policy of not providing the names of detainees. They are in custody at one of the three U.S.-run prisons in Iraq.

One was identified by his family and U.S. law enforcement officials as Cyrus Kar, an Iranian-American filmmaker and U.S. Navy veteran.

Saying Kar is being held unjustly, the American Civil Liberties Union sued the government on Wednesday in an effort to secure his release.

Three of those being detained are Iraqi-Americans, Whitman said. The fifth is a Jordanian-American the Pentagon previously had acknowledged holding.

One of the Iraqi-Americans allegedly had knowledge of planning for an attack and a second possibly was involved in a kidnapping, Whitman said. The third was "engaged in suspicious activity," Whitman said, declining to be more specific. They were captured, one each, in April, May and June.

Whitman said the Iranian-American was arrested with several dozen washing machine timers in his car; such items can be used as components in bombs. Military officials said he was arrested with a cameraman and a taxi driver.

Whitman said there did not appear to be any connections among the five.

If there are charges, it is not immediately clear whether U.S. courts or Iraq's judicial system would handle the cases.

The International Committee of the Red Cross has visited each of the detainees, Whitman said.

In Los Angeles, Kar's relatives said he was born in Iran and came to the U.S. as a child.

They said Kar, 44, was in Iraq to film scenes for a documentary on Persia's founder when Kar was arrested by Iraqi police at a checkpoint in Baghdad on May 17, a date confirmed by military officials.

"He just had the misfortune to get into the wrong cab," said Steven R. Shapiro, the ACLU's legal director. "Our position is that if the government has any evidence against him, bring him home and charge in a court and then proceed accordingly."

His family said that an FBI agent in Los Angeles told them Kar had been cleared of any charges and that the washing machine timers allegedly belonged to the taxi driver, who was transporting them to a friend.

"I'm here to beg President (George W.) Bush ... to release an innocent boy," Kar's aunt, Parvin Modarress, said at a news conference announcing the suit challenging Kar's detention. "He went to Iraq to do his dream work, to make a documentary."

The FBI searched Kar's Los Angeles home in May, said a U.S. law enforcement official who spoke said on condition of anonymity because the investigation is continuing.

"He's just sat there in limbo. Whatever the government's authority, it certainly doesn't allow them to do that," Shapiro said. He pointed to rulings that allow prisoners held by the U.S. at Guantanamo Bay, Cuba, to challenge their detention.

Whitman said the five Americans were being held in accordance with laws governing armed conflict.

A panel of three U.S. officers rules on whether each prisoner is properly held. That has already taken place for the Jordanian-American. Whitman did not say whether the three Iraqi-Americans or the Iranian-American have been through this process.

Whitman said it is not certain whether they will be turned over to the Justice Department or to Iraq's legal system, which has handled the prosecution of other foreign fighters.

The closest parallel to their situation may be the two American citizens captured opposing U.S. forces in Afghanistan.

Lindh, a California native now in his early 20s, pleaded guilty in civilian court to supplying services to the Taliban government and carrying explosives for them. He received a 20-year prison sentence in 2002. He has since sought to have it reduced.

Hamdi was born in Louisiana and grew up in Saudi Arabia. He was held by the U.S. for three years before being released to his family in Saudi Arabia in October 2004. He gave up his U.S. citizenship as a condition of his release.

Whitman said their cases do not necessarily set a precedent for the handling of the five Americans captured in Iraq because Afghanistan had no functioning government at the time Lindh and Hamdi were captured.