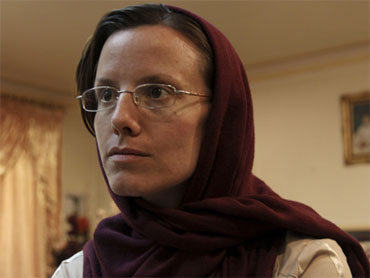 The families of three Americans detained in Iran say they're relieved one woman has been released, but heartbroken her two friends remain in custody.

In a Tuesday statement, the families applaud Iranian authorities for showing compassion for Sarah Shourd. The also call on the government to immediately release her companions, saying Shane Bauer and Josh Fattal "deserve to come home too."

Iranian authorities said they are not considering the immediate release of Bauer and Fattal, who were arrested with 32-year-old Sarah Shourd. Iran has charged all three with spying, though their families say they were innocent hikers arrested in a scenic mountain area along Iran's border with Iraq.

Sarah Shourd's mother, Nora, says in the statement that she's prayed for her daughter's release for 410 days and can't wait to "wrap Sarah in my arms and hold her close."

Nora Shourd says she will ensure her daughter the space she needs to recover from her ordeal.

The stage was set for Sarah Shourd's release last week when Iranian president Mahmoud Ahmadinejad said he intervened as a gesture of Islamic compassion at the end of the holy month of Ramadan. However, the judiciary quickly upstaged the president by saying it was in charge of the case and would set the rules - in the form of the largest known bail for any high-profile Westerner jailed in the past year

Iran freed Sarah Shourd on $500,000 bail Tuesday. Ahmadinejad has said Shourd was being released on compassionate grounds because of health reasons. Her mother says she has serious medical problems, including a breast lump and precancerous cervical cells.

Sarah Shourd, who grew up in Los Angeles, Bauer, who grew up in Onamia, Minn., and Fattal, who grew up in Elkins Park, Pa., were detained along the Iran-Iraq border on July 31, 2009 and accused of illegally crossing the border and spying in a case that has deepened tensions with Washington. Their families say they were hiking in Iraq's scenic north, and that if they crossed the border, they did so unwittingly.

More on the Detained Hikers: