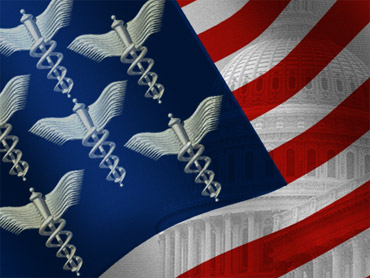 WASHINGTON - The nation's health care tab is on track to hit $4.6 trillion in 2020, accounting for about $1 of every $5 in the economy, government number crunchers estimate in a report out Thursday.

How much is that? Including government and private money, health care spending in 2020 will average $13,710 for every man, woman and child, says Medicare's Office of the Actuary.

By comparison, U.S. health care spending this year is projected to top $2.7 trillion, or about $8,650 per capita, roughly $1 of $6 in the economy. Most of that spending is for care for the sickest people.

The report from Medicare economists and statisticians is an annual barometer of a trend that many experts say is unsustainable but doesn't seem to be slowing down. A political compromise over the nation's debt and deficits might succeed in tapping the brakes on health care, but polarized lawmakers have been unable to deliver a deal.

The analysis found that President Barack Obama's health care overhaul would only be a modest contributor to growing costs, even though an additional 30 million people who would be otherwise uninsured stand to gain coverage.

The main reasons that health care spending keeps growing faster than the economy are the high cost of medical innovations and an aging society that consumes increasing levels of service.

Many of the newly insured people under the health care law will be younger and healthier. As a result, they are expected to use more doctor visits and prescription drugs and relatively less of pricey hospital care. Health care spending will jump by 8 percent in 2014, when the law's coverage expansion kicks in. But over the 2010-2020 period covered by the estimate, the average yearly growth in health care spending will be only 0.1 percentage point higher than without Obama's overhaul.

Part of the reason for that optimistic prognosis is that cuts and cost controls in the health care law start to bite down late in the decade. However, the same nonpartisan Medicare experts who produced Thursday's estimate have previously questioned whether that austerity will be politically sustainable if hospitals and other providers start going out of business as a result. The actuary's office is responsible for long-range cost estimates.

The report found that health care spending in 2010 grew at a historically low rate of 3.9 percent, partly because of the sluggish economy. That will change as the economy shakes off the lingering effects of the recession.

Government, already the dominant player because of Medicare and Medicaid, will become even more important. By 2020, federal, state and local government health care spending will account for just under half the total tab, up from 45 percent currently. As the health care law's coverage expansion takes effect, "health care financing is anticipated to further shift toward governments," the report said.

Estimates from previous years had projected that the government share would already be at the 50 percent mark, but the actuary's office changed its method for making the complex calculations. Under the previous approach, some private payments such as worker's compensation insurance had been counted in the government column. Technical accuracy — not political pressure — was behind that change, said Stephen Heffler, one of the experts who work on the estimates.

Separately, another new report finds that the United States continues to spend far more on health care than other economically developed countries. The study by the Commonwealth Fund found that U.S. health care spending per person in 2008 was more than double the median — or midpoint- for other leading economies. Although survival rates for some cancers were higher in the U.S., the report found that quality of care overall was not markedly better.

The Medicare actuary's estimates for health care spending are published in the journal Health Affairs.