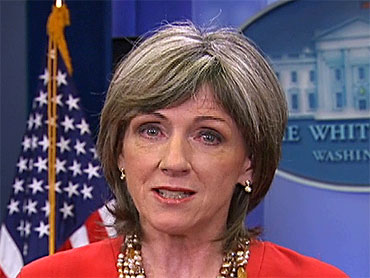 Following the back-and-forth of the past few days about who ultimately is in charge of stopping the massive oil leak in the Gulf of Mexico - BP or the United States government - the White House's top official on energy made it very clear this morning that the feds are calling the shots - if only to follow through on what local officials need.

"The government is in charge. We have been in charge and we'll continue to be in charge," Carol Browner, director of the White House Office of Energy and Climate Change Policy, said on CBS' "The Early Show."

This seemed to contradict, if only in tone, remarks made yesterday by Coast Guard Commandant Adm. Thad Allen, who said that while the U.S. government is overseeing BP's response efforts, he saw no need to "take over" the oil company's responsibilities to stop the leak.

Browner said the oil company's expertise is needed to stop the oil leak 5,000 feet under water in the Gulf of Mexico.

"We need the best minds working on this, and that's what's going to help get this thing plugged," she told "Early Show" anchor Harry Smith. "And we've brought to bear the best minds in the United States government and across our universities. And BP does have the technology. They're the ones who understand how the robots work; they're the ones who understand how the vessels work.

The disaster has seen confidence wane in both the White House and BP. According to a new CBS News poll, an overwhelming majority - 70 percent - disapprove of BP's handling of the spill, compared with just 18 percent who find the company's efforts satisfactory. Forty-five percent of respondents disapproved of the government's response, with 35 percent satisfied.

The punting of the answer to "who's in charge?" took yet another turn, as a new Interior Department report examining the Minerals Management Service's relationship with industry during the Bush administration finds lax oversight of offshore drilling as well as ethics lapses which Interior Secretary Ken Salazar today called "deeply disturbing."

The report (which follows up on a 2007 investigation) found that between 2000 and 2008, staffers at MMS accepted tickets to sports events, lunches and other gifts from oil and gas companies, and used government computers to view pornography.

Salazar said several employees in the report have resigned, were fired, terminated or referred for prosecution. He said it showed the importance of his plan to abolish the agency and replace it with three new entities.

When asked to address the concerns of local officials, including Louisiana Gov. Bobby Jindal (who yesterday joined in complaints that the Army Corps of Engineers has been slow in building coastal berms to serve as protection for the state's marshlands), Browner said, "I joined the president on a call yesterday with the coastal governors. The tone on that call was one of appreciation for everything that everybody is doing.

"There was a sense of urgency which we share, a sense of frustration which we share, and, yes, Governor Jindal did raise the issue of these berms, and we're taking a very serious look at them. But I think you need to know that by his own estimation - by the governor's own estimation - these might not be operable for six to nine months. And what we want to do are things that will work today to help these communities to prevent this oil from coming on shore."

She pointed to the deployment of almost two million feet of containment boom and almost one million feet of absorbent boom. "We have 17 staging areas set up to move these things out to these communities," she said.

"The way it works is, these states have developed these plans and they have prioritized that the most sensitive areas get protected first, and we are following their plans," Browner said. "We're working in coordination with each of the governors with their experts to ensure that their plans are being implemented. And we're going to continue to do that.

"We're not going to rest until this is resolved," Browner said.