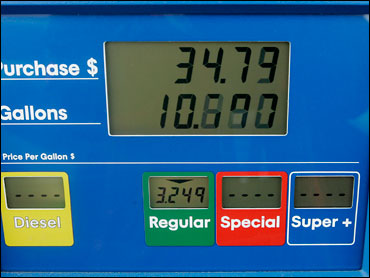 The rapidly rising cost of crude oil has prompted a big spike in U.S. gasoline prices, with some experts saying the cost of regular gas could hit $4 a gallon.

The AAA reports that the average cost of regular gasoline in the nation was $3.14 a gallon - up 19 cents a gallon in the past two weeks, according to The New York Times. The cost of gasoline was $2.35 a gallon a year ago.

AAA spokesman Geoff Sundstrom told the Times it was possible gasoline prices could hit $4 a gallon this summer.

"We've gone from a worrying situation for gasoline to one that is quite alarming," Sundstrom told the newspaper.

Driving the increase is the cost of crude oil, which hit an intraday high of $102 a barrel Wednesday as a slide in the U.S. dollar prompted investors to pump more money into energy futures as a hedge against inflation.

The dollar sank to a record low against the euro after the release of three disheartening U.S. economic reports Tuesday that show that the economy is slowing as prices for consumer goods rise. The dollar's decline prompted investors to seek a safe haven from turmoil in the financial markets and the threat of inflation.

"Crude has cracked through the $100-level again and that's driven by financial investors moving money into commodities markets," said Victor Shum, an energy analyst with Purvin & Gertz in Singapore.

"The U.S. dollar weakened against the euro and the economic data also indicated that inflation in the U.S. rose in January, and commodities are generally considered a hedge against inflation," Shum said. "We are therefore seeing these strong prices that have really little to do with oil market fundamentals."

Light, sweet crude for April delivery spiked as high as $102.08 a barrel in electronic trading on the New York Mercantile Exchange before slipping back to $101.23, up 35 cents.

In London, Brent crude added 33 cents to $99.80 a barrel on the ICE Futures exchange, below the intraday record of $100.30 a barrel set earlier in the session.

The U.S. Labor Department said wholesale inflation rose by 1 percent in January on soaring oil and food costs. And Standard & Poor's also reported that U.S. home prices fell 8.9 percent in the last three months of 2007 from a year earlier.

A report by the Conference Board, a business-backed research group, that its Consumer Confidence Index fell to the lowest since February 2003, far below what analysts had been expecting, indicated that consumers might continue to curb their spending in the coming months.

But traders in both the energy market and the U.S. stock market, which also advanced sharply, seemed largely unfazed. Oil has risen in recent days amid an increase in speculative buying, with some traders believing that global demand will be high enough to support higher crude prices even if the American economy is slowing.

Gasoline inventories are expected to rise by 400,000 barrels while supplies of distillates, which include heating oil and diesel, fell by 1.8 million barrels last week, according to a Dow Jones Newswires poll of analysts.