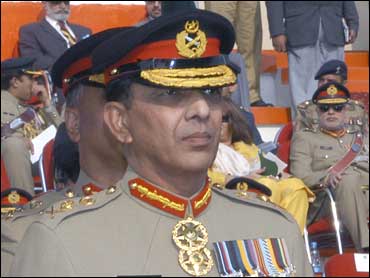 Pakistan's army chief General Ashfaq Pervez Kayani, known for his pro-U.S. views in battling Taliban militants, on Thursday, July 22 had his tenure extended for three years beyond his retirement due in November this year, in a step likely to be seen favorably in Washington.

Kayani's extended tenure may be crucial for the future of U.S. efforts to seize control of Afghanistan by defeating Islamic militants fighting under the banner of the Taliban and al-Qaeda, western defense officials said.

Pakistan's prime minister Yusuf Raza Gilani in a speech on the state-run Pakistan Television (PTV) said, "We are confident that under the leadership of General Ashfaq Pervez Kayani, the war against terrorism will be taken to its conclusion."

Kayani is widely credited by western officials for having overseen a stepped up campaign by Pakistan's military in its fight against Taliban militants.

Within the country, he is also credited by many for having overseen a significant lift to the military's image as a credible fighting force, in sharp contrast to its highly political role under former army chief and former president General Pervez Musharraf.

Since winning freedom from British colonial rule in 1947, Pakistan has been ruled by the military for more than half of that time. While the military is out of direct rule over the country today, it continues to wield vast influence in key aspects of security and foreign policy. But the military's historical role in Pakistan continues to prompt speculation over powerful Generals continuing to nurture political ambitions in spite of the military remaining back in its barracks.

The extension in Kayani's tenure beyond a three year term marks the first time since 1951 that an army chief's tenure has been extended by an elected civilian government. In the past, such extensions have been done only while the military ruled over Pakistan.

A senior western defense official who spoke to CBS News in Islamabad on condition of anonymity said U.S. officials would appreciate the move.

This is especially vital for the U.S. as the Obama administration seeks to consolidate its hold over Afghanistan before beginning a drawdown in its troops from Afghanistan by the middle of 2011.

"The U.S. will only want the Pakistani military to increase its commitment to the fight. General Kayani has set the direction and won respect for the military's fight against the Taliban" said the western defense official. Neither U.S. nor Pakistani officials publicly discuss Pakistan's exact role in assisting the US in targeting suspected Taliban and al-Qaeda hide-outs within Pakistan's border.

In recent months, western diplomats familiar with the Afghanistan-Pakistan region have said the Pakistan military may be positioning itself to play a key role in persuading the Taliban to eventually join a process of political reconciliation in Afghanistan. After Gilani's announcement, one senior western diplomat in Islamabad who also spoke to CBS News on condition of anonymity said; "the Pakistan military sees itself well placed to not only fight the militants but also use its past contacts with such groups to bring them to the negotiating table" in a reference to the military's past patronage of militant groups which it used as proxies for staging insurgencies in Afghanistan, as well as India's predominantly Muslim state of Kashmir.