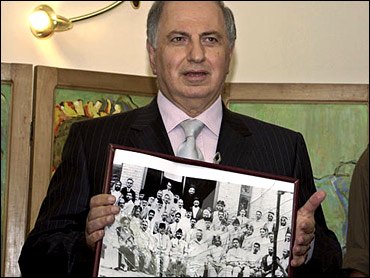 In the latest setback for a man once seen as the possible leader of a free and democratic Iraq, U.S. soldiers and Iraqi police raided the Baghdad home and offices of Iraqi politician Ahmad Chalabi.

American soldiers and armed U.S. civilians could be seen milling about Chalabi's compound in the city's fashionable Mansour district. Some people could be seen loading boxes into vehicles. Aides said documents and computers were seized without warrants.

A senior coalition official said several people were arrested and that arrest warrants were issued for "up to 15 people" on allegations of "fraud, kidnapping and associated matters."

Newsweek magazine has reported that Chalabi and some of his aides are suspected of giving information about U.S. security operations in Baghdad to Iran.

The magazine also said a separate investigation was under way into allegations that members of Chalabi's organization, the Iraqi National Congress, had engaged in extortion and other forms of corruption in Iraq.

Chalabi supporters suggested that the raid was politically motivated bid to intimidate the former exile, who has become extremely vocal in his criticism of Washington.

At a press conference after the raid, Chalabi lashed out at the ruling Coalition Provisional Authority, complaining it was coddling former members of Saddam's Baath Party and treating Iraqis badly.

"I am America's best friend in Iraq," Chalabi said. "If the CPA finds it necessary to direct an armed attack against my home, you can see the state of relations between the CPA and the Iraqi people."

The raid was a symbol of how far Chalabi's stock has fallen in the eyes of U.S. officials.

Prior to the U.S. invasion of Iraq, Chalabi produced a string of defectors whose stories suggested that Saddam posed an imminent threat to the United States because of his weapons of mass destruction.

A key claim came from a Chalabi-sponsored defector who told U.S. intelligence that in order to evade U.N. inspectors, Saddam put his biological weapons labs in trucks.

The assertion that Saddam had mobile weapons labs was a major feature of Secretary of State Colin Powell's speech to the U.N. on why military action needed to be taken against Iraq.

The flow of information caused Chalabi's star to rise in White House and Pentagon circles, despite some warning signs about his reliability.

For example, Chalabi, a former banker, was convicted of fraud in absentia in Jordan in 1992 in a banking scandal and sentenced to 22 years in jail. He has denied any wrongdoing.

Ironically enough, Chalabi's downfall began with an action he had enthusiastically supported: the U.S. invasion of Iraq.

In an interview with 60 Minutes, Chalabi minimized the importance of the defector who told of the mobile weapons labs.

"What he said is that these are mobile biological labs. He did not say that they are weapons factories. There's a big difference," Chalabi said.

Chalabi, who had returned to Iraq with a private army of 700 "freedom fighters" following the invasion, began to lose favor with U.S. officials as it became increasingly clear that much of information he supplied was suspect.

Chalabi holds a seat on the Iraqi Governing Council, but he has been unable to build a base of popular support with the Iraqi people.

The New York Times and the Washington Post report that Chalabi has been feuding with L. Paul Bremer, the American civilian administrator in Iraq. The Times quoted Chalabi aides as saying the former exile's relationship with Bremer was so bad that he skipped Governing Council meetings that Bremer attended.

Earlier this week, the U.S. ended the $340,000 monthly payment it was making to Chalabi's Iraqi National Congress. That action was followed by the raid on his Baghdad home.