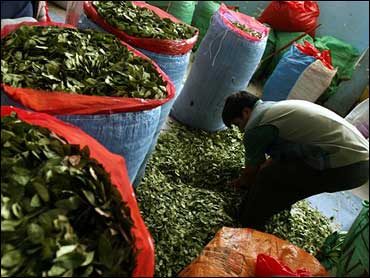 The United States said Thursday that top anti-terror allies Afghanistan, Pakistan and Colombia had fallen short in the war on drugs despite enhanced counter-narcotics efforts and it criticized perennial foes Iran, North Korea and Venezuela for not cooperating.

In its annual global survey of the drug war, the department said massive opium poppy production in Afghanistan, long the world's top producer of the main ingredient for heroin, continued to pose a major threat due to its links with groups such as the Taliban.

"Afghanistan's huge drug trade undercuts efforts to rebuild the economy and develop a strong democratic government based on the rule of law," the department said in the 2007 International Narcotic Control Strategy Report.

"There is strong evidence that narcotics trafficking is linked to the Taliban insurgency. These links between drug traffickers and anti-government forces threaten regional stability," the department said.

It added that endemic "corruption" and prevailing "dangerous security conditions" were seriously hindering efforts to combat Afghan poppy production, which shot up 59 percent to a record 5,644 tons from 2005 to 2006.

Across the border in Pakistan exists a major transit point for opiates and hashish, where Taliban and Al Qaeda operatives are also believed to operate, the State Department said. It said it believed the government there had launched several promising new anti-narcotics initiatives.

But the report said rampant corruption, especially by underpaid lower-level law enforcement and local officials, had hurt Pakistan's efforts and "is likely to be associated with the movement of large quantities of narcotics and precursor chemicals."

Iran, a member of President George W. Bush's "axis of evil," is attempting to deal with a domestic drug consumption surge but has yet to enact or enforce laws to decrease demand that has resulted in what the report said "can only be called an epidemic of opiate abuse."

It also noted indications that domestic opium production is on the rise in the Islamic Republic.

In the Western Hemisphere, Colombia, Mexico, Venezuela and Bolivia were identified once again as major suppliers of illegal drugs, mainly cocaine, to the United States, Europe and Asia.

Ahead of Bush's trip to Latin America next week that will include Colombia and Mexico, however, only Bogota and Mexico City were singled out for positive efforts.

This was not the case in either Venezuela and Bolivia, both of which are led by anti-U.S. leftists, where the report said hostile governments had either refused to cooperate or were lagging in the counter-narcotics field.

"In contrast to the strong stands taken by the governments of Mexico and Colombia, political will in Venezuela and Bolivia faltered last year," Patterson said.

Under President Hugo Chavez, Venezuela was cited by the United States in both 2005 and 2006 as having "failed demonstrably" to comply with its international anti-drug commitments, a situation that remains constant, the department said.

Because of this, it said, "organized crime is flourishing and (drug) seizures and arrests are limited to low-level actors."

Bolivian President Evo Morales, a backer and still the leader of a major coca growers union who has campaigned for some legal use of coca, came in for criticism in the report for failing to deal with increased production.

"Over the past year, Bolivia experienced an erosion of previous successes," Patterson said, noting the country recorded its lowest level of coca eradication in more than 10 years in 2006.

In Asia, Myanmar, also known as Burma, opium production continued to fall but its military rulers still failed to meet international standards and the nation remained the world's second-largest producer, the report said.

Burmese rebel groups, meanwhile, continued to be a major source of methamphetimine, it said.

The report praised China and Thailand, both of which border Myanmar and have been major conduits for illegal drugs produced there, for their efforts in stemming the trade.

Little data exists for North Korea, another member of Bush's "axis of evil," but the report said the State Department continues to believe that the isolated Stalinist state is involved in numerous criminal enterprises, including the narcotics trade.

"The department is of the view, but not certain, that the North Korean government has sponsored criminal activities in the past, including narcotics production and trafficking," it said, while noting no confirmed cases of this in 2006.