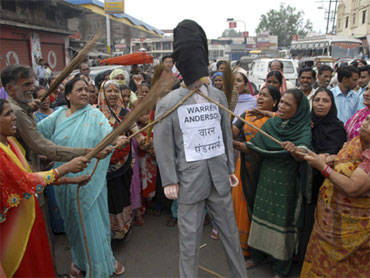 An Indian court issued a warrant Friday for the arrest of the former head of the American chemical company responsible for a gas leak that killed at least 10,000 people in Bhopal 25 years ago.

Warren Anderson was the head of Union Carbide Corp. when its factory in the central Indian city leaked 40 tons of poisonous gas on Dec. 3, 1984 - the world's worst industrial disaster.

More than 555,000 people who survived the initial disaster are thought to have suffered aftereffects, though the exact number of victims has never been determined. Many have died over the years from gas-related illnesses, like lung cancer, kidney failure and liver disease.

On Friday, in response to a recent appeal by a victims' group, Prakash Mohan Tiwari ordered the arrest of Anderson, who is reportedly living in the U.S. Tiwari, who is the chief judicial magistrate of Bhopal, also ordered the federal government to press Washington for the American's extradition.

Anderson was arrested immediately after the disaster, but he left the country soon after.

The Indian government has since said that it did not know where he was, but CNN-IBN television recently reported he is in the Hamptons - a wealthy area outside New York.

In Bhopal, victims and civil rights activists who gathered outside the court cheered at the news of the order. They threw slippers at an effigy of Anderson and hit it with brooms, as they danced in the streets.

In 1989, Union Carbide paid $470 million in compensation to the Indian government and said officials were responsible for the cleanup. Victims accuse New Delhi of delaying distribution of the funds.

The government says its efforts were slowed when Midland, Mich.-based Dow Chemical Co. took over Union Carbide in 2001, seven years after Union Carbide sold its interest in the Bhopal plant. Meanwhile, Dow maintains that the 1989 settlement resolved the legal case.
By Associated Press Writer Nirmala George