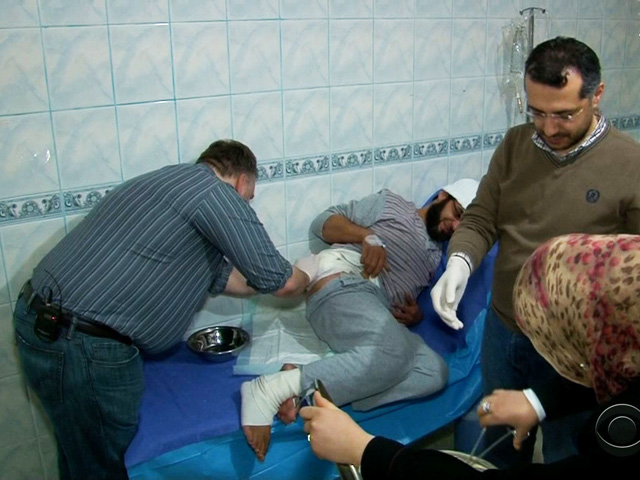 GAZIANTEP, Turkey -- Dr. Abdalmajid Katranji is an American surgeon used to working in top-rated hospitals. Now, in a converted kitchen, he treats the horrific injuries of Syria's civil war.

A chronic lack of funds forces Dr. Katranji to improvise.

"Here, I've used needles and thread that we use to sew clothes to sew people back together," he said. "I've literally gone to mechanic shops and carpenters to borrow their tools to clean them up as best we can to be able to perform certain surgeries or to remove shrapnel."

Born and raised in Michigan to Syrian parents, this is the seventh time Dr. Katranji has left his wife and four children at home to come to help the victims of the Syrian conflict.

The makeshift rehabilitation center, just over Turkey's border with Syria, relies on private donations and volunteer doctors. Many of the patients are rebel fighters.

Dr. Katranji said what he's seen at the rehabilitation center has taken a personal toll, especially one case - a baby whose life he couldn’t save.

"It got cold enough where basically the baby froze to death and died overnight," he said. "The mother was asking us to please warm the baby. All we had to do was warm the baby, and the baby would wake up. It gets to you. It was a very difficult thing to deal with."

Dr. Katranji's patients have visible wounds, as well as scars that go much deeper.

Nidal Hassan is an interior decorator from Homs whose body was left riddled with shrapnel in a rocket attack. He wept as he said the same attack killed his three closest friends.

"That baby just dying, just freezing to death - and it's a tragedy that could so easily have been averted if the world would just kind of look at this as a humanitarian crisis the way it should," he said.

Not one Syrian has said they're optimistic about the peace talks. Most said they are a pointless political exercise that won't achieve anything, and many Syrians said they are angry because they said the outside world is ignoring their suffering.