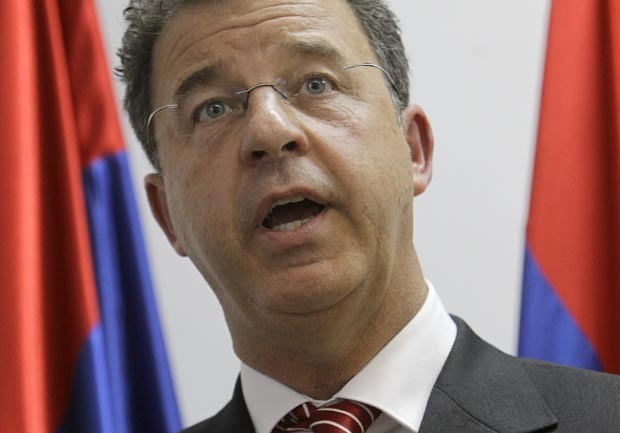 (AP) LAS VEGAS - A former Bosnian Serb police commander accused of playing a leading role in the 1995 massacre of Bosnian Muslims in Srebrenica has been deported to his native country, U.S. officials said Thursday.

Radojkovic was turned over to Bosnia-Herzegovina law enforcement officials for prosecution on crimes charges stemming from the execution of Muslim boys and men in Srebrenica — an event described a Europe's bloodiest since World War II. Bosnia authorities say Radojkovic was arrested at the Sarajevo airport.

Authorities preparing for the trial of former Bosnian Serb military leader Ratko Mladic on war crimes charges at The Hague, Netherlands, said this month the remains of almost 6,000 people had been exhumed from mass graves in the Srebrenica area. Estimates of the dead run as high as 8,000.

"For the families who lost loved ones at Srebrenica, justice has been a long time coming," Immigration and Customs Enforcement Director John Morton said in a statement, "but they can take consolation in the fact that those responsible for this tragedy are now being held accountable."

The Immigration and Customs chief pointed also to the January 2010 deportation to Bosnia-Herzegovina of Nedjo Ikonic, a Milwaukee, Wis., resident identified as another former special police commander linked to the Srebrenica massacre.

Morton promised to ensure the U.S. "does not serve as a haven for human rights violators and others who have committed heinous acts."

Mladic is standing trial before a military war tribunal on wider charges stemming from atrocities during a process dubbed "ethnic cleansing." Bosnia's 1992-95 war following the breakup of the former Soviet republic of Yugoslavia left more than 100,000 dead.

In Srebrenica, Bosnian Serb forces are blamed for overrunning a contingent of peacekeepers in July 1995 in a United Nations-designated "safe area" and executing Bosnian Muslim men and boys.

Prosecutors allege Radojkovic commanded a special police brigade that rounded up about 200 Muslim men in the nearby Konjevic Polje region for execution, the ICE statement said.

Radojkovic moved to the United States in 1999 and lived in Las Vegas, the statement said. He was arrested in January 2009 after a joint investigation by Bosnian authorities and U.S. Homeland Security agents linked him to possible war crimes.

An immigration judge later that year ordered Radojkovic deported on multiple grounds, finding that he ordered or participated in "extrajudicial killing." Radojkovic later lost a challenge his removal.