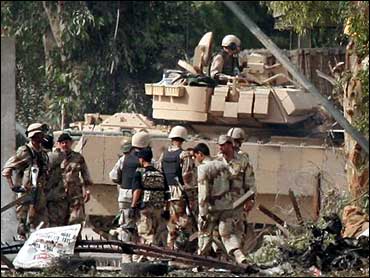 The number of U.S. military deaths in Iraq rose to 1,500, an Associated Press count showed Thursday as the military announced one of its troops was killed in action just south of the capital.

The latest fatality occurred Wednesday in Babil province, part of an area known as the "Triangle of Death" because of the frequency of insurgent attacks on U.S.- and Iraqi-led forces there.

Hassan said the car bombers were trailing a police convoy that was trying to enter the ministry. Iraqi security forces opened fire on the vehicles and disabled them before they could arrive at a main checkpoint outside the building, said Col. Adnan Abdul-Rahman, an Interior Ministry spokesman.

"Casualties were very small because they didn't get to the checkpoint," Abdul-Rahman said.

Another car bomb exploded in Baqouba, 35 miles northeast of the capital. There has been no word on casualties.