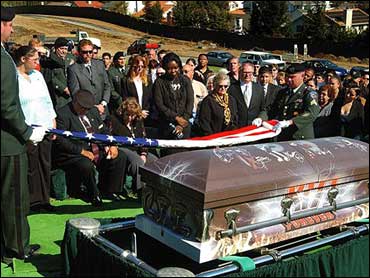 The American military death toll in the Iraq war reached 2,000 Tuesday with the announcements of three more deaths, including an Army sergeant who died of wounds at a military hospital in Texas and a Marine and a sailor killed last week in fighting west of Baghdad.

The 2,000 mark was reached amid growing doubts among the American public about the Iraq conflict, launched in March 2003 to destroy Saddam Hussein's alleged weapons of mass destruction. None was ever found.

More than 90 percent of the U.S. death toll occurred after President Bush declared the end of major combat in May 2003.

One-quarter of the soldiers killed in Iraq and Afghanistan are from rural America, CBS News correspondent David Martin reports, according to the most recent statistics, even though only one-fifth of the military-age population lives there.

In other words, Martin says,

small-town America is suffering
more than its fair share of sacrifice.

As for the number of Iraqis who have died violently since the U.S.-led invasion, the number is many times larger than the U.S. military death toll. In one sign of the enormity of the Iraqi loss, at least 3,870 were killed in the past six months alone, according to an Associated Press count.

One U.S. military spokesman said it is possible the figure for the entire war could be 30,000 Iraqis, which many experts see as a credible estimate. Others suspect the number is far higher, since the chaos in Iraq leaves the potential for many killings to go unreported.

The losses are far larger than most analysts and Pentagon planners expected before the war and mean Iraqi civilians are bearing most of the suffering.

In an e-mail statement to Baghdad-based journalists, command spokesman Lt. Col. Steve Boylan said media attention on the 2,000 figure was misguided and "set by individuals or groups with specific agendas and ulterior motives."

He described the grim statistic as an "artificial mark on the wall" and urged news organizations to focus more on the accomplishments of the U.S. military mission in Iraq.

The numbers also bring to mind another conflict, according to CBS News Military Analyst and retired Army Colonel Mitch Mitchell.

"In the Vietnam War, we had many more people over there, but we're taking about one quarter the number of casualties that the Vietnam War was experiencing in each month," Mitchell said. "When you figure out the differences in the numbers deployed, it comes out to just about the same number of casualties each month that we took in Vietnam. That's an appalling statistic."