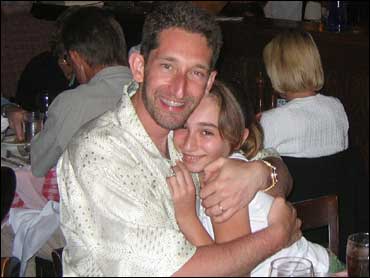 The bodies of a California businessman, his teenage daughter and the Panamanian pilot of a plane that crashed over the weekend were found Tuesday in Panama's mountains, officials said. A 12-year-old American girl survived.

But she suffered multiple traumas and hypothermia, and cold, wet weather prevented authorities from evacuating her immediately from the crash site on the slope of a remote volcano.

The wreckage was located at a hard-to-reach site on the Baru volcano, at an altitude of some 3,500 feet, the civil aviation authority said in a separate statement.

Rescuers were giving medical attention to Francesca Lewis — a friend of Talia's who was traveling with the Kleins — in a makeshift shelter, said prosecutor Jose Henriquez, who is handling the investigation.

"They're warming her and we hope to be able to get her out sometime tonight to a hospital," Henriquez said by telephone from Boquete in Chiriqui state, adding that he did not have enough information to say whether her life was in danger. "It's raining and it's very cold."

Officials had said earlier that Lewis had already been taken to a hospital in David, the capital of Chiriqui.

Aviation authorities said the cause of the crash was not yet known, but RPC radio reported that witnesses saw the plane flying at a very low altitude around noon Sunday amid buffeting winds.

Klein, a 37-year-old hedge fund manager, was on vacation with the two girls at an eco-resort he owns in the Central American nation, according to Kim Klein, his ex-wife and Talia's mother. The three had been scheduled to return to Santa Barbara, California, on Monday, she told the AP from Boquete, Panama, earlier Tuesday.

But their plane disappeared after departing Sunday morning from Islas Secas off Panama's Pacific coast, heading for the Chiriqui volcano, about 285 miles west of the capital.

Kim Klein traveled to Panama Monday morning and spoke with authorities about the possible whereabouts of the aircraft. She had offered $25,000 to anyone who could locate it.

Yahoo Inc. purchased eGroups for $450 million in August 2000 and it is now known as Yahoo Groups.

A Klein colleague described him as a brilliant businessman who skipped high school and graduated from college at age 17.

"One of the most interesting people you could ever speak to on any ... in a myriad of subjects," Kurt Benjamin, the vice president of business development at Pacificor, told KNBC-TV in Los Angeles. "He's just an unbelievable individual."

Benjamin said Klein was close to his daughter.

"Her father was so proud of her," he said. "She was an amazing, accomplished horseback rider — just an absolute winner. Solid, solid young girl."