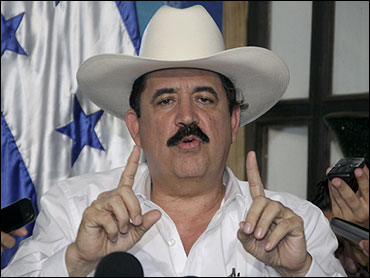 The Obama administration on Thursday cut all non-humanitarian aid to Honduras over the ouster of President Manuel Zelaya, making permanent a temporary suspension of U.S. aid imposed after he was deposed in June.

The State Department made the announcement as Secretary of State Hillary Rodham Clinton was meeting with Zelaya. Spokesman Ian Kelly did not say how much assistance would be cut but officials have said previously that more than $200 million is at stake. Kelly said it affected "a broad range of assistance to the government of Honduras."

"The Secretary of State has made the decision, consistent with U.S. legislation, recognizing the need for strong measures in light of the continued resistance to the adoption of the San Jose Accord by the de facto regime and continuing failure to restore democratic, constitutional rule to Honduras," Kelly said in a statement.

The San Jose accord, brokered by Costa Rican President Oscar Arias, aims to return Zelaya to power with limited authority until elections now set for November. But Zelaya's replacement, Roberto Micheletti, has refused to accept it, prompting Clinton's decision to cut aid.

In making the aid cut decision, however, Clinton did not determine that Zelaya's ouster met the U.S. legal definition of a military coup d'etat. Such a finding would have forced the administration to cut off asssistance and had been urged by some leading lawmakers, including Rep. Howard Berman, D-Calif., chairman of the House Foreign Affairs Committee.

"This one looks, walks and quacks like a duck," Berman wrote in Thursday's editions of the Los Angelese Times. "It's time to stop hedging and call this bird what it is. And if, for whatever reason, the State Department lawyers do not conclude that this was a coup, Congress should examine other ways by which it can directly affect the flow of aid."

Zelaya was deposed and exiled on June 28 amid suspicions among his opponents that he wanted to overturn the constitutional provision limiting Honduran presidents to a single term. He has denied that was his goal.

Kelly said that while stopping short of the coup determination, Clinton's decision "recognizes the complicated nature of the actions" that led to Zelaya's ouster. He said those "involve complex factual and legal questions and the participation of both the legislative and judicial branches of government as well as the military."

He said "restoration of the terminated assistance will be predicated upon a return to democratic, constitutional governance in Honduras." He added that the United States would not recognize the results of the election under current conditions and stressed it was imperative that the vote meet international standards.

"That election must be undertaken in a free, fair and transparent manner," he said. "It must also be free of taint and open to all Hondurans to exercise their democratic franchise. At this moment, we would not be able to support the outcome of the scheduled elections."

"A positive conclusion of the Arias process would provide a sound basis for legitimate elections to proceed," Kelly said. "We strongly urge all parties to the San Jose talks to move expeditiously to agreement."

It has also previously announced the suspension of nearly $20 million in military and development assistance to Honduras and stopped issuing most visas at the U.S. embassy in Honduras.