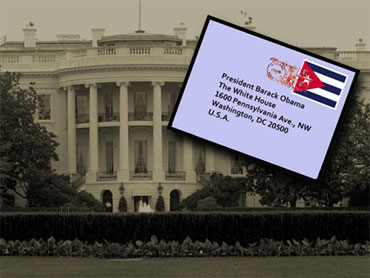 The United States and Cuba plan to start talks on resuming direct mail service for the first time in nearly half a century as the Obama administration continues to try to engage the communist island, diplomats said Tuesday.

The negotiations are tentatively set for Sept. 17, according to the diplomats, as a follow-up to the resumption of talks in July on the legal immigration of Cubans to the United States. The two sides agreed on the two sets of discussions in late May, a month after President Barack Obama eased travel and financial restrictions on Americans with family members in Cuba.

The diplomats spoke on condition of anonymity because details of the negotiations are not yet complete.

Direct postal service between the United States and Cuba was terminated in 1963, and since then mail has had to go through third countries. Previous attempts to restore the link have failed and experts believe Cuba's communist government remains sensitive about what kind of material might be sent to the island from the United States.

Mr. Obama wants to improve relations with Cuba and has taken several steps to gauge the Cuban leadership's interest in doing so, including supporting a recent decision by the Organization of American States to revoke Cuba's 1962 suspension from the 34-country group.

The president also has said the U.S. embargo on the country enacted in 1960 will not be lifted until Cuba enacts democratic and economic reforms, such as freeing political prisoners and allowing freedom of speech. Several U.S. lawmakers have proposed intermediate measures, such as ending the ban on travel to Cuba by all Americans.

Cuba has responded warily to the overtures, insisting on removal of the embargo. However, when it agreed to restart the immigration talks and the postal negotiations, Cuba also expressed a willingness to cooperate with the United States on fighting terrorism and drug trafficking, and on hurricane disaster preparedness.

Before the U.S.-Cuban immigration talks were suspended by the Bush administration in 2003, the twice-yearly meetings in alternating countries had been the highest level contacts between them.

The talks were created so the countries could track adherence to 1994 and 1995 accords designed to promote legal, orderly migration between the two countries. The aim was to avoid a repeat of the summer of 1994, when tens of thousands of Cubans took to the sea in flimsy boats.

On July 14, U.S. and Cuban officials met in New York to resume the immigration negotiations in what the State Department said at the time was a sign of "our interest in pursuing constructive discussions with the government of Cuba to advance U.S. interests on issues of mutual concern."