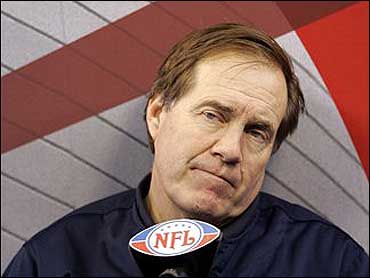 Mayer had argued that fans spent large sums to see games that were essentially rigged, and he sought $185 million in damages for Jets fans alone. The 3rd Circuit Court didn't buy it.

"We do not condone the conduct on the part of the Patriots and the team's head coach, and we likewise refrain from assessing whether the NFL's sanctions (and its alleged destruction of the videotapes themselves) were otherwise appropriate," Senior Judge Robert E. Cowen wrote for the three-judge panel.

However, he said Mayer failed to prove any legal right to damages.

"At best, he possessed nothing more than a contractual right to a seat from which to watch an NFL game between the Jets and the Patriots, and this right was clearly honored," Cowen wrote.

In oral arguments in Philadelphia last month, the judges - one a longtime Pittsburgh Steelers fan - seemed to share Mayer's concern over the taping, peppering lawyers with questions for more than an hour. Cowen called the taping "a horrendous violation." But he also thought the league issued "a whopper" of a fine - $750,000 - against the Patriots and coach Bill Belichick after they were caught taping signals at the Jets' 2007 home opener in Giants Stadium.

Mayer and his lawyer, Bruce Afran, both worked for consumer advocate Ralph Nader earlier in their careers and consider "Spygate" a consumer-fraud case.

"It's a clear issue of consumer fraud. The mere fact that this is in the context of football doesn't mean that the people who pay to see the game have no rights," Afran said Wednesday.

Many NFL ticket holders struggle to pay the high ticket price and deserve an honest game in return, he said.

"(The opinion) seems to suggest that no matter how much ticket holders pay, they can be defrauded by NFL teams. And it puts the NFL on the same level as professional wrestling," Afran said.

Mayer plans to appeal to the U.S. Supreme Court, buoyed in part by what he called consumer-friendly rulings involving sports teams in other circuit courts. For instance, a circuit court ruled that Ohio's consumer-protection laws apply to statements the Cleveland Browns made about whether they were staying in town, he said.

"We think the matter might be of interest to the Supreme Court," Mayer told The Associated Press. "We never surrender."

The suit alleged that the Patriots taped the Jets' signals in their twice-yearly contests for seven years, and sought treble damages for Jets fans based on a rough average of $100 a ticket.

Lawyer Shepard Goldfein, representing the NFL, had argued that fans likely would buy tickets even if they knew the Patriots were stealing signals. He referred calls for comment on Wednesday's ruling to NFL spokesman Greg Aiello, who declined to comment except to say the ruling speaks for itself. Lawyer Daniel L. Goldberg, representing Belichick and the Patriots, did not immediately return a message.