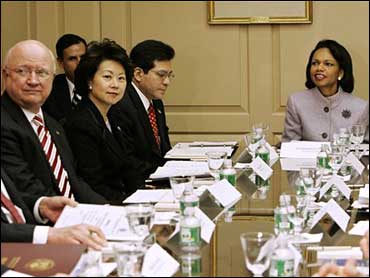 Secretary of State Condoleezza Rice chaired the second session of a panel to "hasten and ease a democratic transition" in Cuba and spoke of change partly by denying the Cuban government money and supplying the Cuban people with information.

Official U.S. policy is to undermine Cuba's planned succession from President Fidel Castro to his 74-year-old brother, Raul. Castro is 79 and U.S. intelligence analysts believe he may be suffering from Parkinson's disease, though Castro has denied this.

It has been left unclear how to achieve democratic reforms in Cuba, which has been under an economic embargo from the United States since 1961, two years after Castro took power.

President George W. Bush appointed the Commission for Assistance to a Free Cuba in late 2003 under the leadership of Rice's predecessor, Colin Powell, and received its first recommendations in May 2004.

"Reconvening the commission at this time sends an important message to the people of Cuba, the current dictatorship and our friends and democratic allies," Rice said in a statement distributed Monday after the meeting. That message is, she said: "After 46 years of cruel dictatorship, now is the time for change in Cuba."

She said the commission's effectiveness comes from integrating the Bush administration's Cuba policy from all agencies of the federal government. By doing that, and implementing the first report's recommendations, she said, "We have empowered Cuban civil society to better organize and advocate for democratic change; we have established measures that denied millions of dollars in revenue to the dictatorship; we are breaking the regime's information blockade on the Cuban people; and we have drawn greater attention to the dictatorship's deplorable treatment of the Cuban people."

Rice said she reconvened the commission to come up with more ways "to help Cubans hasten the day when they will be free from oppression and to develop a concise but flexible strategic plan that will help the Cuban people move rapidly toward free and fair democratic elections."

The main goal, she said, is "to marshal our resources and expertise and encourage our democratic allies to be ready to support Cuba when the inevitable opportunity for genuine change arises."

She said the commission's new report will be completed by May 2006, when it will report to the president its "updated recommendations to hasten democracy and an interagency strategic plan to assist a Cuban-led transition."

The anti-Castro rules in place have drawn some opposition from Cubans in the United States, especially restrictions on travel and sending money to Cuba. Many Cuban-Americans and Cuban residents of the United States are important sources of income for families still in Cuba.