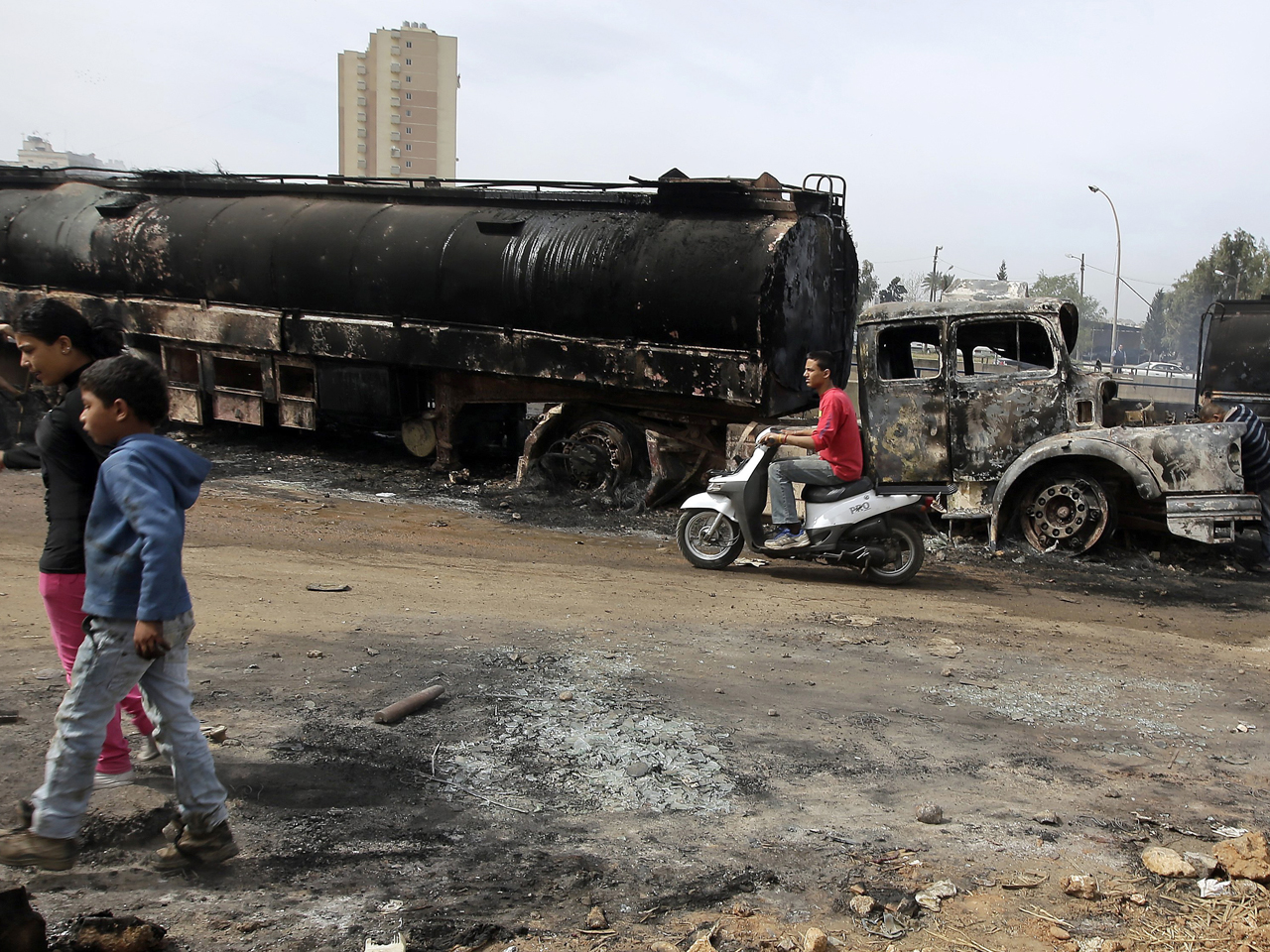 The strikes, which were first reported by Lebanon's state-run National News Agency, came just days after Damascus warned Beirut to stop militants from crossing the border to fight alongside the rebels.

"We can confirm what you are seeing in the press, that regime jets and helicopters did fire rockets into northern Lebanon," State Department spokeswoman Victoria Nuland told reporters at her daily briefing. "This constitutes a significant escalation in the violations of Lebanese sovereignty that the Syrian regime has been guilty of. These kinds of violations of sovereignty are absolutely unacceptable."

Lebanon has been on edge since the uprising against Assad began in March 2011. Gunmen on opposing sides of Syrian civil war have frequently clashed in Lebanon, raising concerns of a spillover.

Assad's ally, the militant Hezbollah group, is Lebanon's strongest political and military movement and has been accused by Syria's overwhelmingly Sunni rebels of assisting Assad in his military crackdown. Assad belongs to a small branch of Shiite Islam.

Hezbollah denies any of its members are fighting alongside Assad but says several of its fighters have been killed while defending themselves against Sunni gunmen in areas along the border.

Syria's conflict began with political protests in mid-March, 2011, and has since become a civil war, with hundreds of rebel groups fighting Assad's forces. The U.N. says more than 70,000 people have been killed and millions have been pushed from their homes by the violence.

In addition to the strikes inside Lebanon, the Syrian capital Damascus saw heavy fighting on Monday.

At least three mortar shells struck central Damascus, the seat of President Bashar Assad's power. The pro-government's Al-Ikhbariya TV said one of the shells fell in Muhajireen district near Tishreen Palace, one of three palaces that Assad uses in the capital.

At least 26 people died in the fighting in Damascus and its suburbs, according to the Britain-based Syrian Observatory for Human Rights.

Meanwhile, the leader of the main Syrian rebel force on Monday threw his weight behind the formation of an interim government to administer rebel-held areas as heavy fighting broke out in the Syrian capital and several suburbs.

In Istanbul, Gen. Salim Idris told reporters that fighters affiliated with his Free Syrian Army, the main rebel group, will work under the umbrella of an interim government and protect its members.

"We recognize the coalition as our political umbrella and we hope this government can be formed unanimously and that this government will exercise its powers in all of Syria," said Idris, the chief of staff of the FSA. "We consider it the only legal government in the country."

Idris' comments sought to boost efforts by the opposition's Syrian National Coalition to choose a prime minister who will form an interim government. The coalition has failed to take such a step twice before, but members say there now appears to be more agreement that such a step is necessary.

The coalition's 73 members meeting in Istanbul are expected to elect an interim prime minister from 12 candidates. The vote is expected by Tuesday.

Idris' comments also sought to portray his group as the most powerful and organized rebel formation in Syria. It remains unclear, however, how many of the hundreds of rebel brigades fighting Assad's forces follow Idris' commands or are linked to his group.

Some of the most effective rebel groups are Islamic extremists who have developed their own support networks. One of them, Jabhat al-Nusra, has been designated a terrorist group by the United States and is said to be linked to al Qaeda.

Idris said his group has no relationship with Jabhat al-Nusra.

He renewed his call for world powers to arm rebel fighters, saying his group would insure that the weapons don't fall into the wrong hands — a prime concern of the U.S. and other powers, especially given Syria's southern frontier with Israel.

Last week, Britain and France urged the European Union to lift a ban on arming Syrian rebels, but with other EU members opposed, no decision was reached.

The Obama administration lent its support Monday to British and French plans to arm Syria's rebels, saying it wouldn't stand in the way of any country seeking to rebalance the fight against an Assad regime supported by Russia, Iran and Hezbollah.

Secretary of State John Kerry said the longer Syria's two-year civil war goes on, the greater the danger of its institutions collapsing and extremists getting their hands on the Arab country's vast chemical weapons arsenal. With some 450,000 Syrians living in neighboring countries as refugees already, he said the conflict is becoming a "global catastrophe."

"If he believes he can shoot it out, Syrians and the region have a problem, and the world has a problem," Kerry told reporters after a meeting with Australian Foreign Minister Bob Carr.

Kerry said the U.S. wants to leave the door open for a political solution. But concerning Syria's rebels, he added, "the United States does not stand in the way of other countries that made a decision to provide arms, whether it's France or Britain or others."

Idris, meanwhile, suggested other types of possible military aid, saying his group would welcome Lebanese or international forces along Syria's border with Lebanon. He also called for rebel units to be trained to seize Syria's chemical weapons.

"The chemical weapons in Syria are not secured," he said, warning that they could be used against rebels or given to "rogue groups, like the Lebanese militant group Hezbollah."

"We ask the international community to help us train special forces that can secure these weapons and keep them from falling into the hands of extremists," he said.