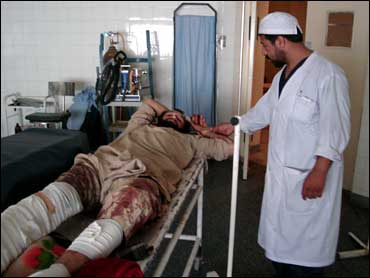 The U.S.-led coalition confirmed a battle between U.S. forces and Taliban militants in southern Afghanistan caused civilian casualties and a joint Afghan-U.S. investigation was under way.

The governor of Helmand province has said 21 civilians were killed in air strikes Tuesday in the Sangin area, though residents said the civilian death toll was higher.

In a statement late Thursday, the coalition said it had treated 20 Afghan civilians wounded in the 16-hour battle, including a child who later died of its wounds.

"There are confirmed reports of civilian casualties, but it was unclear how many," the statement said. "A joint Afghan and coalition force inquiry is being conducted."

Gen. Dan McNeill, the top NATO commander in Afghanistan, told National Public Radio "it does appear there were civilian casualties," but it wasn't clear what caused them. He said it was likely the Taliban militants had been firing on coalition forces from civilian homes.

U.S. Special Forces "got into an ambush by a far superior force, and as they tried to work their way through this by shooting and moving, it became clear this was a pretty good size insurgent force who also could shoot and move pretty well," McNeill told NPR.

"And eventually the only way they were going (to) get out of it ... was to use air strikes. It did not dissuade the insurgents," he said.

The battle in Sangin marked the third major incident resulting in civilian deaths in the last several months, sparking outrage among Afghans and a warning from President Hamid Karzai that civilian deaths can no longer be tolerated.