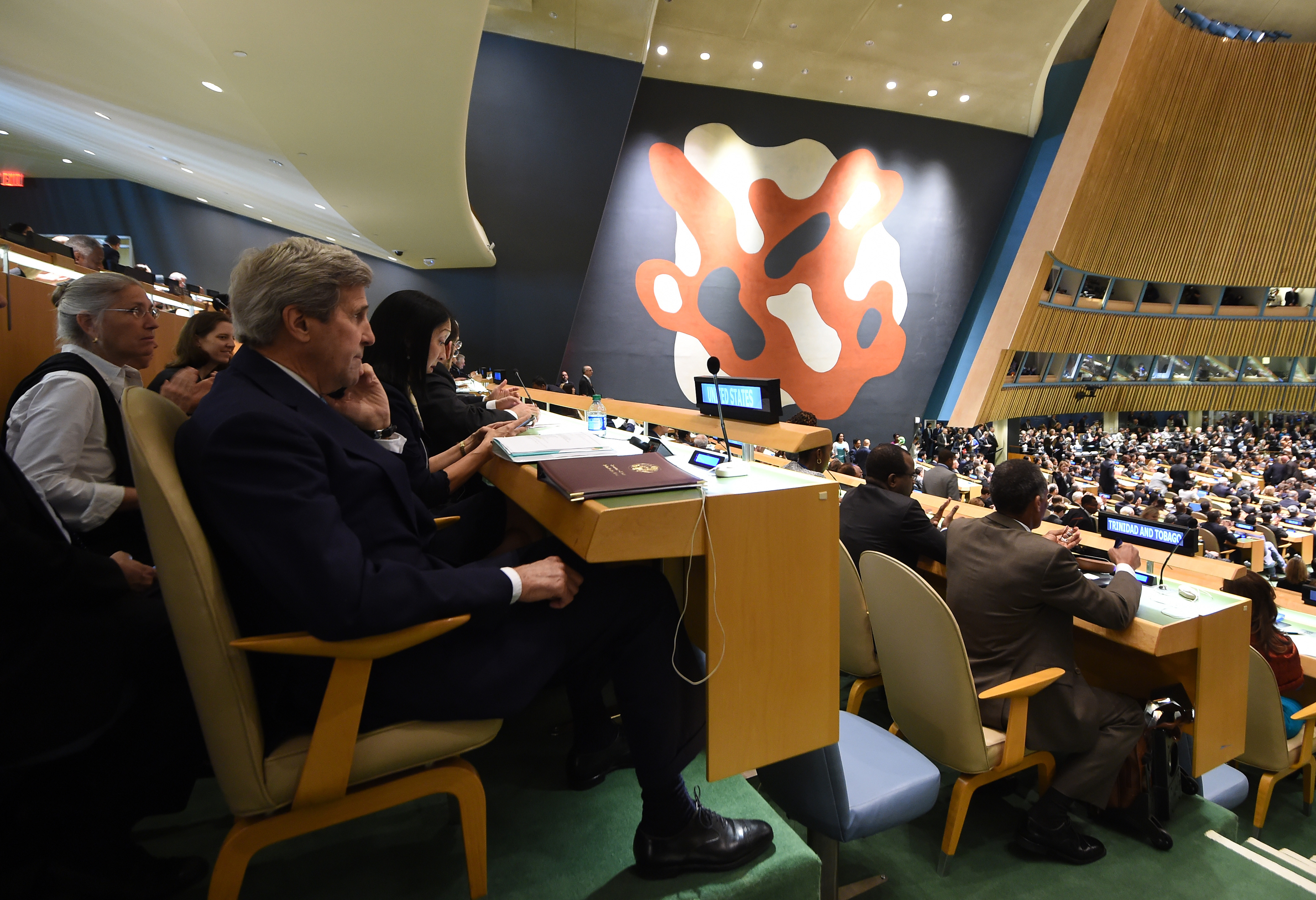 UNITED NATIONS -- At least 171 world leaders gathered Friday at the United Nations to sign a sweeping climate agreement negotiated last year and aimed at slowing global warming and helping poorer nations affected most by it.

The "Paris Agreement" was hammered out in Le Bourget, France, in December, at a summit of diplomats and leaders including U.S. Secretary of State John Kerry, who flew back from Saudi Arabia Thursday night in time to take part in Friday's signing ceremony.

To resounding applause, Kerry said,"It's fair to say that all of us could feel an extraordinary sweep of emotion and joy at the moment in Paris when 196 nations simultaneously said a resounding yes, we will do our part, we will live up to the responsibility to future generations and together citizens of the world, we will work to save our planet from ourselves."

Those negotiations, Kerry said, "began instead to galvanize our focus on how as a global community we are going to address the irrefutable reality that nature is changing at an increasingly rapid pace due to our own choices."

And, on renewable energy, Kerry added, "For the first time in history, despite the low prices of oil, coal and gas, more of the world's money was spent fostering renewable energy technologies than on new fossil fuel plants. "

While the ceremony is something of a culmination, it's only the second of three steps to make the comprehensive climate deal a reality. The first step was the deal being reached in France in the first place -- and getting 196 countries to back it was no small task.

Segolene Royal, France's environment Minister and president of the "COP21" talks in her country last year, told CBS News this week that it was remarkable so many countries were able to agree to the terms. "They now see it in their interests," she said, "and that is the big change."

Friday's signing ceremony at U.N. headquarters is step two, and will be a clear demonstration by the signing countries that they are committed.

And it will be an unprecedented show of commitment; more member states are expected to sign the accord on the first possible day than any previous U.N. agreement.

"We are breaking records in this Chamber -- and that is good news," U.N. Secretary-General Ban Ki-moon said in opening remarks Friday. "But records are also being broken outside; record global temperatures. Record ice loss. Record carbon levels in the atmosphere. We are in a race against time."

"We have momentum," Christiana Figueres, the Executive Secretary of the negotiating organization, told reporters at the U.N. ahead of the ceremony.

But from Friday, the real work begins. "The ratification and fundraising will be key," said Figueres.

That is the third, final, and most difficult step; each nation must unilaterally ratify the agreement -- a step which, in many cases, will involve passage by national legislatures.

For the U.S., Kerry is to sign the agreement Friday and then President Obama will ratify it before he leaves office in December, a senior U.S. official told CBS News in a conference call this week.

"You can't build a border wall when it comes to carbon emissions or global temperatures or the oceans," President Obama told CBS News' Norah O'Donnell in December, emphasizing his firm belief in the importance of the hard-won deal with other major polluter nations like China and India.

Leonardo DiCaprio, a U.N. Messenger of Peace warned the leaders Friday, "our planet will not be saved unless we leave fossil fuels in the ground where they belong."

The agreement will officially come into force when 55 countries -- representing 55 percent of global emissions -- have signed and ratified the deal. At least 15 countries were expected to ratify it Friday alone. Other countries have one year to get the deal done at home.

"We can congratulate each other today, but it will mean absolutely nothing" if you return to your countries and don't take action to implement the deal, DiCaprio said.

Because 2015 was the hottest year on record, negotiators say the U.S. and China are vital to the success of the agreement, which requires countries to set their own programs to achieve the stated goals.

Both the United States and China, which are responsible jointly for 40 percent of global emissions, have said they intend to ratify the deal nationally during 2016. The European Union, which will sign as a group as well as 28 individual nations, has also said it will move forward quickly on ratification.

"We definitely want to be in the first wave of ratifying countries," Maros Sefcovic, Vice President of the European Commission for Energy Union, said Thursday. Sefcovic said the EU wants to be among the nations in the initial group of 55 to ratify that will bring the agreement into effect.

The Paris Agreement, briefly stated, has a handful of goals:

The plan goes into effect 30 days after the required countries ratify it, but a nation may not withdraw for three years, and then only after giving one year's notice. That aspect of the agreement has been challenged by several U.S. opponents who say a new president would have the right to reverse America's participation by executive action, if that is how Mr. Obama ratifies it.