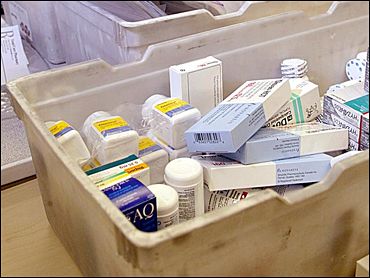 The city of Springfield, Mass., has begun buying prescription drugs in Canada in a voluntary program for city workers and retirees, hoping to save millions of dollars through a favorable exchange rate and government controls.

"The cost savings of prescription medication in Canada, the exact same drug [is] 20 to 80 percent cheaper," Mayor Michael Albano told CBS Radio station WBZ-AM. "As far as I am concerned, it would be irresponsible not to take advantage of the savings."

Americans seeking relief from high prescription drug prices have increasingly turned to pharmacies in Canada, where prescription drugs are much cheaper because of a favorable exchange rate and government controls.

Albano and William Hubbard, associate commissioner for the U.S. Food and Drug Administration, said they didn't know of any other U.S. city that has taken the step.

"We strongly discourage it," Hubbard said. "You are on your own in assuring the safety of the drugs. The Canadian government says it's not part of its responsibility to ensure the safety of drugs being sent to the U.S."

However, Hubbard said he could understand why people are looking to Canada. "The cost savings are there," he said.

"I'm hopeful that Congress and the president realize that cities like Springfield have financial difficulties," said Albano. "We're trying to provide core services, but when healthcare costs go up 12 to 20 percent annual, it's a serious budget buster."

The FDA has issued warnings, but so far has not cracked down on individuals importing U.S.-made drugs for personal use.

Springfield, a city of 152,000 people, could save up to $4 million depending on how many of its 9,000 workers and retirees sign up for the voluntary option, Albano said. The savings could then be used to restore other city services, he said.

In February, the city laid off 320 workers, including 76 police officers and 53 firefighters. Springfield currently spends about $9 million on prescription drugs, and its health care costs have nearly doubled in the past seven years.

About 200 retirees and workers, including Albano, have signed up for the program since July 1. The mayor, who has a diabetic son, said the city has already saved $237 on his prescriptions, and could save about $853 annually.

Springfield also has prescription contracts with local pharmacies and U.S. mail-order pharmacies. The Canadian purchase plan operates much the same as the mail-order services.

"It's a bad way to go," said Nicholas E. Creanza, a Springfield pharmacist whose customers include city workers. "I don't think we are safeguarding our community by going outside the country."

"The administrators of the FDA and Tommy Thompson as the Secretary of Health and Human Services have said that it's not safe to go to foreign countries," countered Albano. "Well, I can tell you that I would not put my own child at risk, and my son is using the prescription medication from Canada."