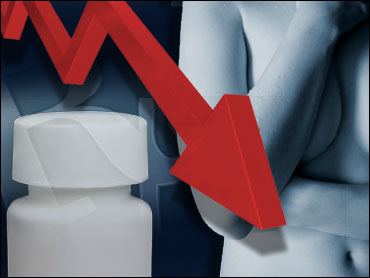 In a startling turnaround, breast cancer rates in the United States dropped dramatically in 2003, and experts said they believe it is because many women stopped taking hormone pills.

The 7.2 percent decline came a year after a big federal study linked menopause hormones to a higher risk of breast cancer, heart disease and other problems. Within months, millions of women stopped taking the pills.

A new analysis of federal cancer statistics, presented by researchers from the M.D. Anderson Cancer Center Thursday at a breast cancer conference in Texas, revealed the drop in tumors.

Why do doctors think the 2003 drop is largely due to hormones?

Cases declined most among women 50 and older, with tumors whose growth is fueled by estrogen — the age group and type of cancer most affected by hormone use. Around 2003, researchers said, these women heeded warnings and stopped using HRT — hormone replacement therapy.

But Dr. Freya Schnabel of New York Columbia Presbyterian says stopping hormone therapy may be just one reason for the dramatic decrease in breast cancer that year, reports CBS News correspondent Sharon Alfonsi. Better mammograms could play a part, too.

"If one thing is true," Schnabel tells Alfonsi, "it's that breast cancer is just not that simple."

"It's very difficult to wrap your arms around this subject of the various pros and cons of hormone replacement therapy," adds CBS News medical correspondent Dr. Jon LaPook.

About 200,000 cases of breast cancer had been expected in 2003; the drop means that about 14,000 fewer women actually were diagnosed with the disease.

The drop also was seen in every single cancer registry that reports information to the federal government.

Researchers looked for a similar drop in other cancers, which could indicate something other than hormones was at work, "and we didn't see anything," said Kathy Cronin, a National Cancer Institute statistician who worked on the analysis.

When the 2003 numbers were first released a few months ago, they were grouped with 2001 and 2002 and portrayed as a leveling off of breast cancer after decades of steady rise. The big single-year drop was not pointed out because experts did not want to make too much of it without knowing whether the trend would continue.

However, Dr. Peter Ravdin, a breast cancer specialist at the University of Texas M.D. Anderson Cancer Center who led the new analysis, said the single year drop is important regardless, because it was so huge and came after years of steady increases.

"We don't know about whether or not it's going to be a trend but we know for this year it was a significant effect," he said.

Doctors estimate that half of women who were taking hormones stopped after July 2002, when the federal Women's Health Initiative study was halted because more women taking estrogen/progestin pills developed breast cancer or heart problems.

That led to new warning labels on the drugs and doctor groups urging women to use the lowest dose for the shortest time possible.

"The hypothesis is entirely plausible, that the discontinuation of hormone replacement therapy could be having an effect," said Dr. Michael Thun of the American Cancer Society.

More than 8,000 breast cancer specialists from 80 countries are in San Antonio for the Charles A. Coltman Jr. Breast Cancer Symposium, the world's largest annual conference on breast cancer, which strikes 200,000 American women each year.

The next set of cancer statistics is due out in April.

He told people who are traveling to do so safely and follow the rules​, and warned of financial penalties for violations.

The turtle was not breathing on his own and was only "minimally responsive," but is now being treated by New England Aquarium's veterinarians.

"The Late Late Show" host tells 60 Minutes, "Genuinely honestly, don't know if we're having this conversation if she hadn't said yes. I think it's that important to our show." See the interview, Sunday.

The pope also addresses the coronavirus pandemic and criticized people who protested preventative guidelines in his new book.