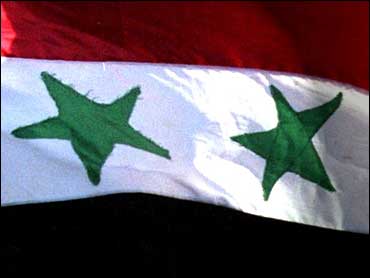 The Bush administration, turning up the heat on Syria, acted on Thursday to block the financial assets of the country's interior minister and its chief of military intelligence for Lebanon.

The Treasury Department believes the Syrians have played lead roles in directing their country's military presence in Lebanon.

The action against Ghazi Kanaan, Syria's minister of interior, and Rustum Ghazali, the chief of Syrian Military Intelligence for Lebanon, means that any assets belonging to these men found in the United States will be frozen. Americans also are prohibited from doing business with them.

The power for the department to take the action stems from a May, 11, 2004, executive order by President Bush. Thursday's designations targeting the two Syrians were the first under that order, said Treasury Department spokeswoman Molly Millerwise.

Syria's official news agency, SANA, quoted a government press official as saying the U.S. action was an attempt to escalate political pressure on Syria and divert attention from what Syria described as Israeli aggression in southern Lebanon.

Syria is on the State Department's list of countries and organizations accused of supporting terrorism. Despite strained relations with the U.S., Syrian officials have repeatedly said they are cooperating with the U.S.-led fight against terrorism. The country has said all its military forces left Lebanon in April after some three decades as the dominant political and military force there.

"We are seeking democracy to take hold in Lebanon and other places in the Middle East, yet Syria continues to support violent groups and political strife," Treasury Secretary John Snow said.

The department alleged that during Kanaan's command in Lebanon, he ensured that Syrian military intelligence officers remained "deeply involved" in Lebanese political and economic affairs.

Kanaan also is alleged to have provided support to Hezbollah, which the U.S. has deemed a terrorist group. "In 2002, three rockets in a convoy allegedly escorted by Kanaan were personally delivered across the Syrian-Lebanese border to Hezbollah in Lebanon," the department said.

The department alleged that Ghazali "manipulated Lebanese politics to ensure that Lebanese officials and public policy remained committed" to Syria's goals and interests.

In late 2004, he allegedly warned that Syria "was determined to physically harm anyone who interfered with Lebanon's economic situation and caused a crisis of confidence," the department said.

Apart from Syria's activities in Lebanon, the Bush administration faults Syria for not keeping fighters from crossing its border into Iraq to join in the insurgency there.