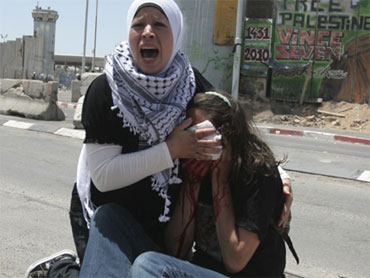 A spokesman for the U.S. Embassy in Tel Aviv says it has asked Israel to investigate an incident where an American woman lost her eye during a pro-Palestinian demonstration.

Kurt Hoyer said on Monday the embassy has asked for details "as soon as possible."

Emily Henochowicz, a 21-year-old from Maryland, lost her left eye after being hit in the face by a tear gas canister Israeli policeman fired during a demonstration last week in Jerusalem.

Israeli military spokesman Moshe Fintzy said the army was investigating the matter and regretted if anyone was harmed. He said soldiers faced a violent protest.

The deadly incident comes a week after nine pro-Palestinian activists were killed in a clash with naval commandos as their vessel tried to reach Gaza. The interception prompted a worldwide outcry and growing demands that Israel ease or lift its blockade of Gaza.