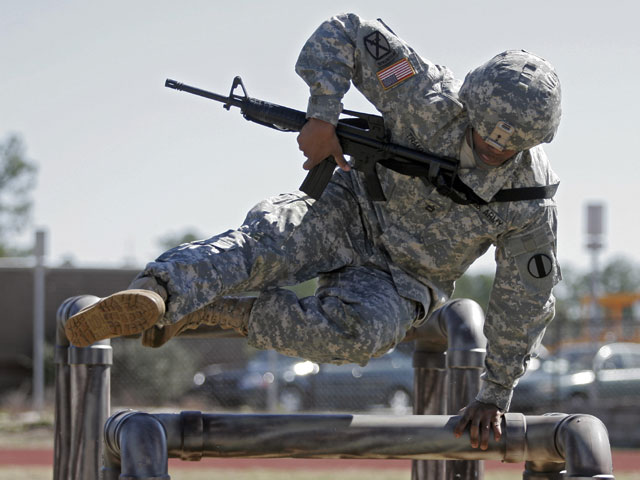 FORT JACKSON, S.C. - The Army plans to toughen its fitness tests for the first time in 30 years to make sure all soldiers have the strength, endurance and mobility for battle, adding exercises like running an obstacle course in full combat gear and dragging a body's weight.

Officials at Fort Jackson, a major Army training center, said Tuesday the new regimen would replace twice-a-year testing that focused on push-ups, sit-ups and a two-mile run. Trials are starting this month at eight bases and the plan could be adopted Army-wide after reviews later this year.

Lt. Gen. Mark Hertling, the head of Army training, said the fitness test had to be revamped because repetitive exercises like sit-ups don't translate into survival on the battlefield.

Unveiling the pilot to reporters, he said the service was also adopting lessons from Iraq and Afghanistan combat veterans who had to learn in the field to carry anywhere from 40 to 70 pounds of weapons and body armor.

"Soldiers like to be challenged. This will definitely challenge them," Hertling said. "This is a good, combat-related test."

The pilot program comprises two new tests in place of the current exam.

The new "physical readiness" test adds such things as a 60-yard shuttle run and a standing long jump to one minute of push-ups and a 1.5-mile timed run. This might be given every six months, said Frank Palkoska, head of the Army's Fitness School at Fort Jackson.

A "combat readiness" test includes running 400 meters with a rifle, moving through an obstacle course in full combat gear, and crawling and vaulting over obstacles while aiming a rifle. Soldiers also have to run on a balance beam while carrying a 30-pound ammo box and do an agility sprint around a course field of cones.

To test pulling a fallen comrade from the battlefield, soldiers must drag a sled weighted with 180 pounds of sandbags. That combat portion of the test might be given only before deployments, but that has not been decided.

The tests will be given to all soldiers and officers, including Army Reserves and National Guard, even those recalled soldiers who are now 60-years plus, officials said.

Specific standards for men, women and by age ranges are still being worked out, Palkoska said.

"This is about training smarter, not just training more," said Hertling.

The pilot will begin this month and test data will be given to Army leaders by October. The program could be implemented Army-wide during the fiscal year that starts in October, Palkoska said.