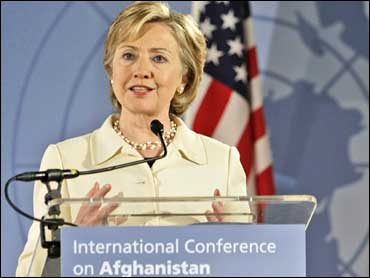 In a cautious first step toward unlocking 30 years of tense relations, senior U.S. diplomat Richard Holbrooke had a brief but cordial meeting with Iran's deputy foreign minister Tuesday at an international conference on Afghanistan.

The rare diplomatic approach was the first official face-to-face interplay between the Obama administration and the Iranian regime. U.S. Secretary of State Hillary Rodham Clinton cautioned that the talks between Holbrooke and Iranian diplomat Mehdi Akhundzadeh were promising but not "substantive."

"They agreed to stay in touch," Clinton said at the close of a one-day conference on Afghan security and development that was designed partly to allow the diplomatic turn with Iran.

The meeting between Holbrooke, President Barack Obama's hand-picked Afghanistan envoy, and Akhundzadeh came on the sidelines of a session aimed at improving Afghanistan's future prospects. Akhundzadeh pledged to help the reconstruction of its neighbor, but he criticized U.S. plans to send more troops into Afghanistan.

The gathering was being closely watched for signs that the U.S. and Iran can work together on a common problem after years of hostility. The two countries cooperated at a distance in 2001 and 2002 after U.S.-led forces ousted Afghanistan's Taliban government.

The U.S. and Iran have been estranged for 30 years, since young Iranians stormed the U.S. Embassy in Tehran and took more than 50 Americans hostage for 444 days. Representatives of the two nations are rarely even in the same room with one another, but they have had accidental-on-purpose public meetings on the sidelines of other international gatherings.

The face-to-face pleasantries, along with a diplomatic letter hand-delivered to the Iranian delegation by a U.S. official, were carefully calibrated overtures from the Obama administration aimed at testing the clerical regime's willingness to take larger steps.

Afghanistan and Iran share nearly 600 miles of border, and Clinton said the United States and Afghanistan share concern over the flow of drugs into Iran.

"We will look for ways to cooperate with them and I think the fact that they came today, that they intervened today, is a promising sign that there will be future cooperations," she said.

The diplomatic letter asked for Iran's help in releasing or lifting travel restrictions on two American women in Iran, and information on a man missing for two years since traveling to Iran on business.

"It was a letter to the government of Iran seeking both information and assistance about our three American citizens," Clinton told CBS News chief foreign affairs analyst Lara Logan.

The Iranians did promise to cooperate in Afghanistan, but, Logan reports, could not resist taking aim at the United States.

The cases and the American position on them were known. What is different was the Obama administration's decision to approach Iran directly, instead of using a go-between.

Information or help from Tehran "would constitute a humanitarian gesture by the Iranians in keeping with the spirit of renewal and generosity that marks the Persian new year," Clinton said.

The conference opens a week of diplomatic gatherings in Europe where Mr. Obama is also expected to try for a fresh start in the bumpy U.S. relationship with Russia. Numerous U.S. allies have encouraged a better relationship with oil-rich and strategic Iran.

As a candidate, Mr. Obama said he would reach out to Iran, and even hold direct talks with its leaders, if he decided it would serve U.S. interests. That was a marked change from the early days of George W. Bush's administration, when Iran recoiled angrily at being labeled part of an "axis of evil."

Organizers of Tuesday's conference called it a success merely for the range of nations and organizations attending. Clinton and other diplomats pledged support for the fragile government of Afghan President Hamid Karzai, but avoided the argument over fighting troops that had put the United States at odds with some NATO allies.

"Hundreds of Afghan policeman have sacrificed their lives in eradication of crops, interdiction and bringing criminals to justice," Karzai said.

This week's NATO summit meeting is not expected to raise significant numbers of fighting forces, despite Mr. Obama's decision to add some 21,000 U.S. troops before the end of summer.

Karzai and Clinton said Afghanistan would welcome Taliban fighters who embrace peace, reject al Qaeda and pledge to abide by the Afghan constitution.

Clinton said most Taliban fighters have allied with anti-government forces "out of desperation" rather than commitment, in a country that has barely made inroads against poverty and lack of development.

"They should be offered an honorable form of reconciliation and reintegration into a peaceful society" if they abandon violence and break with al Qaeda, she said.

Akhundzadeh was critical of Mr. Obama's plan to add U.S. troops, saying the money they cost would be better spent on building Afghanistan's own forces. But he added that "Iran is fully prepared to participate in the projects aimed at combating drug trafficking and the plans in line with developing and reconstructing Afghanistan."

In a closing statement, the conference agreed to promote good governance and stronger institutions in Afghanistan while generating economic growth and strengthening security.

Karzai and U.N. Secretary-General Ban Ki-moon opened the conference Tuesday. CBS News foreign affairs analyst Pamela Falk at the U.N. said the world body is playing a more active role in Afghanistan, due to the renewal of their mandate by the Security Council and the Secretary-General's concern for the safety of personnel in the country.

(CBS)
Meanwhile, the top Taliban commander in Pakistan promised on Tuesday an assault on Washington "soon" - one he said would "amaze" the world.

Baitullah Mehsud (at left) also claimed responsibility for Monday's attack on a police academy outside the eastern Pakistani city of Lahore, saying it was in retaliation for U.S. missile strikes against militants along the Afghan border.