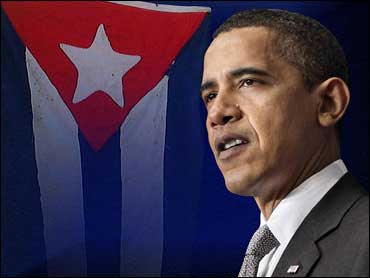 A senior American diplomat has held unannounced, high-level talks in Havana with the Cuban government, three State Department officials told The Associated Press on Tuesday, raising hopes for a thaw in long-icy relations.

The talks were the first of their kind in years between representatives of the U.S. and Cuban governments, the bitter Cold War rivals among whom trust appears to be gradually building.

Bisa Williams, the U.S. deputy assistant secretary of state for Western Hemisphere affairs, met with Cuban Deputy Foreign Minister Dagoberto Rodriguez, visited an area affected by hurricanes in the Western province of Pinar del Rio and toured a government agricultural facility during a six-day trip to Cuba this month, the officials told AP.

The meetings came on the heels of Sept. 17 talks on the possibility of restarting direct mail service between the countries, suspended since 1963. Those discussions had been public, but neither country had previously revealed that Williams remained in Havana for five extra days.

One U.S. official described the talks as "respectful" and said they were more significant for having taken place, than for any substantive breakthroughs between the two sides, which have been at odds since shortly after former Cuban leader Fidel Castro marched into Havana on New Year's Day 1959.

"We were going over ground we haven't gone over for a long time," said the official. "Each side was taking advantage of the opportunity to size each other up."

The official was not authorized to publicly discuss details of Williams' visit and spoke on condition of anonymity. The Cuban government did not immediately respond to a request for comment.

"Williams met with host government officials and a wide range of representatives from civil society to gain a full appreciation of the political and economic situation on the ground," he told AP.

Kelly said Williams followed up on ongoing U.S.-Cuba migration talks, the next round of which he said are tentatively scheduled to take place in December. One of the officials said those talks were likely to be held in Havana.

The last time a senior U.S. official traveled to Cuba for talks of any kind was in 2002, but Williams' extended, wide-ranging and unpublicized trip here this month was different.

U.S.-Cuban relations have improved considerably since President Barack Obama took office in January, saying he was ready to extend a hand of friendship to America's traditional foes. In addition to the mail talks, Obama has loosened financial and travel restrictions on Americans with relatives on the island.

The Americans have also made other small but significant gestures - like turning off an electronic sign that had streamed anti-Castro messages from the windows of the U.S. Interests Section, which Washington maintains in Cuba instead of an embassy. The Cubans then took down dozens of large black flags they had set up nearby to block the view.

Cuban President Raul Castro and his brother, Fidel, have both had warm words for the American leader, with Fidel Castro last week praising Obama as courageous for taking on climate change.

Cuban Foreign Minister Bruno Rodriguez said Monday in a speech at the United Nations that the communist government is ready to normalize relations with its larger neighbor and will work with Washington in the meantime on other issues such as fighting drug smuggling.

He said Cuba has sought full diplomatic relations with the U.S. for decades and repeated Raul Castro's offer to sit down with Obama for a "respectful, arm's length dialogue with the United States, without overshadowing our independence, sovereignty and self-determination."

Cuba experts say it remains to be seen whether the diplomacy of small measures is a path to ultimately reaching agreement on core issues, though diplomats on both sides have privately voiced optimism.

Obama has left intact the 47-year trade embargo on the island, and U.S. officials have said for months that they would like to see the single-party state accept some political, economic and social changes.