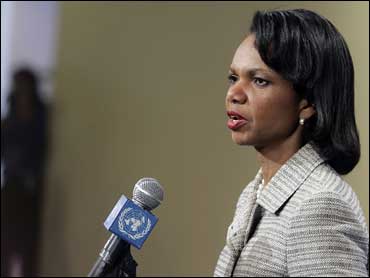 The United States bowed to pressure from its allies on Tuesday and agreed to support a new program to temporarily funnel additional humanitarian aid directly to the Palestinian people.

A statement by Mideast peacemakers, issued after a day of closed-door diplomatic meetings, did not suggest precisely how much or what kind of aid they would provide. But the agreement seemed to underscore a concern that months of withholding most aid from the Palestinians, part of an effort to pressure the new Hamas-led government toward a more accommodating stance with Israel, was harming the Palestinian people.

Secretary of State Condoleezza Rice said the European Union would take the lead in the new effort. The United Nations and Russia, the other partners in the Quartet peacemaking group along with the United States, also endorsed the program.

"The thrust of this is the international community is still trying to respond to the needs of the Palestinian people," Rice said.

"Secretary Rice is clearly trying to work with the European and Russian political directors within the the U.N.-backed talks known as the Quartet, to find an interim solution working through non-government organizations," said CBS News foreign affairs analyst Pamela Falk. "U.S. negotiators came into the talks expecting to withhold all aid and left deciding that short-term humanitarian aid provided to the Palestinian people would move the discussion closer to a peace plan."

The United States and European Union have cut off much of the aid that had flowed in the past to Palestinian programs, working to prevent any of it from helping Hamas, the militant Islamic group that has conducted numerous terrorist attacks.

The cutoff has left the Palestinian government virtually broke and increasingly unable to provide basic services. Some 165,000 government workers, whose incomes had supported one-third of Palestinian families, have not been paid for the past two months.

Going into Tuesday's meetings at the United Nations, Rice said she was urging the allies to retain a hard-line approach toward aid that could end up benefiting Hamas.

After a second session, the diplomats produced a statement expressing their willingness "to endorse a temporary international mechanism that is limited in scope and duration, operates with full transparency and accountability, and ensures direct delivery of any assistance to the Palestinian people."

The statement said the assistance would begin as soon as possible, with a decision on its continuation coming in three months.

The allies also said they had "concern about the delivery of humanitarian assistance, economic life, social cohesion and Palestinian institutions," all of which have been deteriorating since the aid suspension.

Meanwhile, Palestinian President Mahmoud Abbas wrote to Rice and the other international peacemakers asking them to focus on "a way of stopping the economic boycott against the Palestinian people and finding a way to send economic aid," Palestinian U.N. observer Riyad Mansour told reporters.

He did not outline specifically which aid Abbas wanted restored.

Although Abbas' secular Fatah Party was trounced by the better-organized militants, he remains in office. He has been trying to bridge a gap between the West and Hamas that he says will unfairly punish ordinary Palestinians.

The United States announced a $10 million package of medical assistance for the Palestinians on Tuesday. An initial $4 million in medicine and supplies could begin flowing as soon as this week.

The United States and some allies in Europe and elsewhere have differed over tactics to counter Hamas without worsening the Palestinians' humanitarian plight.

The European Union has proposed sending money directly to Abbas to be spent on hospitals, schools and humanitarian needs. While the U.S. says it wants to keep sending humanitarian aid, it has been cool to the European proposal.

Even greater differences exist between the United States and Russia.

The international group issued a warning to Hamas three months ago that it risked a loss of international aid if it did not change its policies.

The United States says it respects the democratic elections that produced the Hamas victory and has no express policy to oust the militants. Its financial strategy, however, seems aimed at undermining public support for Hamas and making it difficult or impossible for the militants to govern.

Although the E.U. has also cut aid, public opinion in Europe often favors Palestinian causes and governments are leery of looking too harsh.