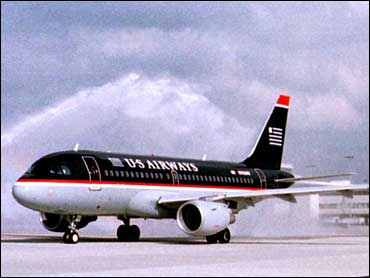 Just two days after two of the nation's largest airlines filed for bankruptcy, US Airways received approval Friday to emerge from Chapter 11 protection.

Also on Friday, the head of US Airways said ticket prices are going up.

Record fuel prices and competition are forcing fare hikes in the airline industry.

The airline must wait at least 10 days before formally emerging from bankruptcy. It expects to emerge and formally close on its merger with America West, the nation's eighth largest airline, late this month or in early October.

U.S. Bankruptcy Judge Stephen Mitchell's approval came after he ruled on the last remaining objections to the airline's plan of reorganization. Most significantly, the airline's unions had objected to an executive severance package that would provide $12 million in pay to 11 top executives who will not be given jobs with the merged airline.

Mitchell approved the severance package, saying it was in line with executive contracts in the airline industry.

Friday's ruling puts a cap on US Airways' second Chapter 11 filing since August 2002. The first filing came after federal regulators rejected a proposed merger with UAL Corp.'s United Airlines, followed by the industrywide collapse caused by the Sept. 11 attacks.

US Airways thought it had corrected its problems in the first bankruptcy, but it failed to anticipate rising fuel costs and rapidly increasing competition from low-cost carriers like Southwest Airlines, which began flying at US Airways' hub in Philadelphia.

US Airways is one of four major U.S. carriers in bankruptcy protection, along with United Airlines, Delta Air Lines Inc. and Northwest Airlines Corp.

Delta and Northwest filed for Chapter 11 in New York on Wednesday. United Airlines filed for bankruptcy protection in 2002.

America West and US Airways believe their merger will be successful because US Airways — which just four years ago had the highest labor costs in the industry — now pays salaries equivalent to those at low-cost carriers like Jet Blue and America West.

Shareholders of America West, based in Tempe, Ariz., will own about 37 percent of the new company. Outside investors, who supply $565 million in financing, will get an estimated 52 percent, and unsecured creditors of US Airways will receive about 12 percent stake.

The deal will be funded by $1.5 billion in new capital from a variety of investors, including aircraft maker Airbus.

The two airlines hope to formally close on the merger late this month or in early October.