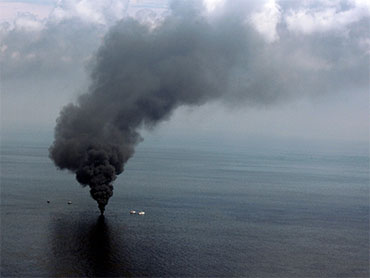 U.S. jets pounded parts of Fallujah on Thursday, targeting insurgents in a city where American forces were said to be gearing up for a major offensive.

CBS News Correspondent Charlie D'Agata reports this is not the opening salvo to the full-scale invasion of the city that U.S. and Iraqi forces have been preparing for, but more of an attempt to break down insurgent strongholds which the military calls "known barricaded fighting positions."

But the intensity of the bombardment may signal that main push may not be far off.

Al-Jazeera television broadcast a threat by an unspecified armed group to strike oil installations and government buildings if Americans launch an all-out assault on Fallujah. The report was accompanied by a videotape showing about 20 armed men brandishing various weapons including a truck-mounted machine gun.

Gunmen kidnapped a Lebanese-American businessman — the second U.S. citizen seized this week in Baghdad — and videotape Wednesday showed the beheadings of three Iraqi National Guardsmen and an Iraqi officer.

U.S. and rebels forces also clashed overnight on the southeastern outskirts of the city after insurgents fired a rocket-propelled grenade at Marines. Two insurgents were killed while no U.S. casualties were reported, said Lt. Nathan Braden, of 1st Marine Division. Hospital officials in Fallujah reported three civilians were injured in the overnight shelling.

U.S. forces have been preparing for a major offensive in Fallujah, west of Baghdad, and other Sunni militant strongholds in hopes of curbing the insurgency ahead of January's election.