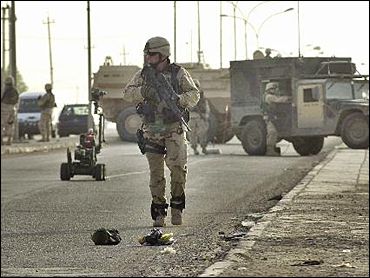 A U.S. aircraft destroyed a Baghdad office of radical Shiite cleric Muqtada al-Sadr, killing two people and injuring six others, his followers said Monday. There was no comment from the U.S. command.

Insurgents have targeted foreigners working on reconstruction projects, attacks that have slowed down the reconstruction and put in question the critical U.S. goal of rebuilding Iraq.

And U.S. Marines in Fallujah began joint patrols with Iraqi security forces Monday in the city under the agreement that ended the almost monthlong siege of the city.