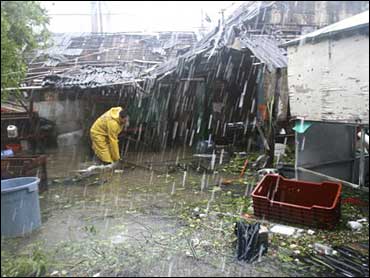 President Fidel Castro has confirmed that Cuba agreed to let three U.S. aid officials visit the island to assess damage from Hurricane Wilma's assault on the island this week.

But during a Thursday night television appearance, he made it clear that his idea in letting them visit was to discuss ways to improve disaster assistance among countries in the region.

"Cuba has not solicited international aid," Castro said during a regular public affairs problem, reading from the diplomatic note his country sent to the U.S. government accepting the visit.

"It shares, however, the point of view" that countries in the region should "provide each other with mutual assistance in situations of disaster."

The State Department had announced earlier Thursday that Cuba agreed to let three U.S. Agency for International Development experts visit in a rare show of cooperation.

Cuba has routinely turned down American offers of assistance during disasters over the years. Reporting from Havana, CBS News producer Portia Siegelbaum notes that in fact, Castro made a point of saying the U.S. has not offered aid beyond sending the three experts.

Wilma assaulted Cuba with unprecedented flooding earlier this week, Siegelbaum reports. Some streets in the capital were awash in waist high water. Chunks of the city's famous Malecon seawall were ripped off, and already-crumbling buildings along the coastal highway were battered by high winds and waves. But Castro said it was not a national disaster for the island, that recovery teams had immediately sprung into action and not a single life had been lost.

Click here for Portia Seigelbaum's report on the latest developments in Cuba.
According to the State Department's Cuba experts, this was the first time the Castro government has accepted a U.S. offer of emergency assistance, department spokesman Sean McCormack said.

The display of U.S.-Cuban cooperation was not expected to produce any easing in the friction between the two countries. The official U.S. policy is to seek a democratic transition in Cuba once the 79-year-old Castro is gone, rather than accept a regime-orchestrated succession. The U.S. trade embargo dates back more than 40 years, and Castro was waged a decades-long struggle against U.S. interests.

Nevertheless, the Cuban leader seemed impressed by what he considered to be the "respectful" tone of the letter offering assistance sent by the new chief of the U.S. Interests Section in Washington, Michael Parmly.

Castro had a particularly contentious relationship with Parmly's predecessor, James Cason, who he once characterized as a "bully."

After Hurricane Dennis pummeled the island in July, Castro expressed gratitude for Washington's offer of $50,000 in aid but rejected it.

Havana offered 1,600 doctors to help victims of Hurricane Katrina, which devastated the U.S. Gulf Coast in August. The State Department said the Cuban help was not needed because enough American doctors had offered their services.

It is not unusual for the United States to offer aid to adversary countries. Iran accepted U.S. aid following an earthquake in 2003. Also, there have been frequent humanitarian food shipments to North Korea over the past decade.

It was unclear when the three U.S. aid experts would arrive in Cuba. Any aid offers would be based on what that team found, and all aid would be distributed through independent groups, McCormack said.