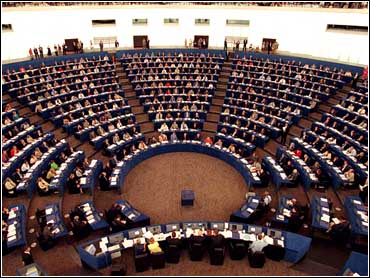 Allegations that a U.S.-led spy network snoops on billions of private phone calls, faxes and e-mails have inspired sharp criticism in Europe, with officials calling the reports shocking and warning people to be wary about what they say electronically.

A report commissioned by the European Parliament and released Wednesday claimed the communication-bugging network is eavesdropping on Europe's business community. Despite denials from governments named in the report, the head of the EU's assembly called for strong action.

"We have every reason to be shocked at the fact that this form of espionage, which has been going on for a number of years, has not prompted any official protest," European Parliament Speaker Nicole Fontaine said late Wednesday.

The EU Commission has not said whether it will launch an investigation into the allegations.

The intelligence group, called Echelon, is led by the United States and includes Britain, Canada, Australia and New Zealand. It was set up at the beginning of the Cold War in 1947 and gradually grew to include a network of surveillance-interception stations spread across the globe.

Allegations that Echelon carries out commercial espionage against fellow European allies have met with deep concern, especially from the French, who themselves are members of a wider intelligence ring connected to Echelon.

"We have to be as prudent as possible in the transmission of data. Such data must never contain vital information, especially when its relayed by retransmission satellite ... with international connections," Justice Minister Elisabeth Guigou told the National Assembly in Paris.

"'No' is the short answer to that. These things are governed by extremely strict rules and those rules will always be applied properly," Blair said.

"The National Security Agency is not authorized to provide intelligence information to private firms. That agency acts in strict accordance with American law," Rubin said. "U.S. intelligence agencies are not tasked to engage in industrial espionage or obtain trade secrets for the benefit of any U.S. company or companies."

The report on Echelon was written by a British investigative journalist, Duncan Campbell. Campbell said most international Internet communications are being routed through the United States -- and through nine known NSA interception sites.

Intelligence facilities can easily tap into "billions of messages per hour," including telephone calls, fax transmissions and private e-mails, he said. He urged the EU to take action to protect against unwanted interception of communications, insisting the interceptions violate humarights.

Campbell's report is the second of two commissioned by the EU assembly. The first report said firms in EU nations incur losses of several billion dollars per year as a result of corporate espionage.

Written by Constant Brand
©2000 The Associated Press. All Rights Reserved. This material may not be published, broadcast, rewritten, or redistributed