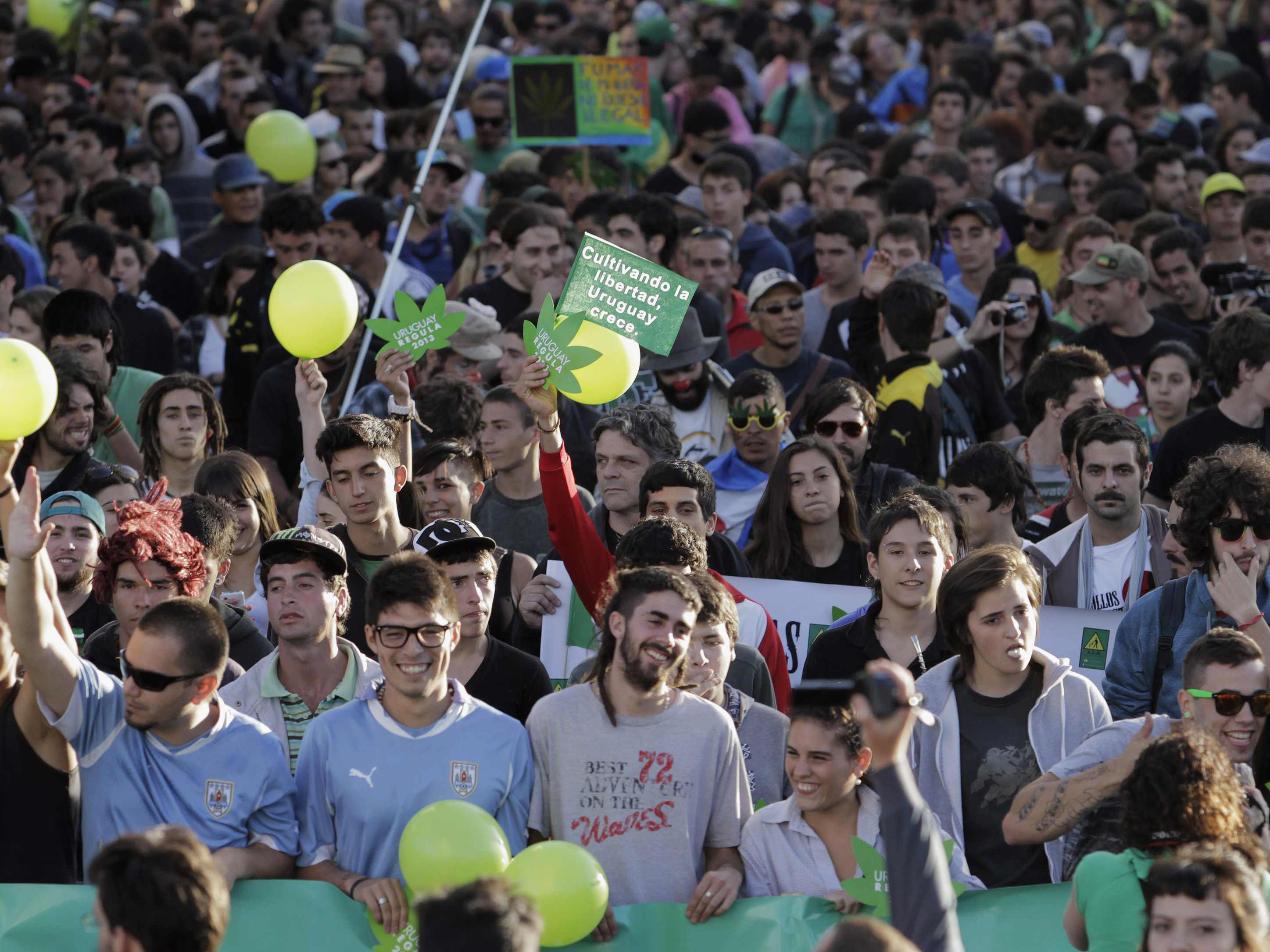 MONTEVIDEO, Uruguay - Uruguay became the first country to legalize the growing, sale and smoking of marijuana on Tuesday, a pioneering social experiment that will be closely watched by other nations debating drug liberalization.

A government-sponsored bill approved by 16-13 votes in the Senate provides for regulation of the cultivation, distribution and consumption of marijuana and is aimed at wresting the business from criminals in the small South American nation.

Cannabis consumers will be able to buy a maximum of 40 grams (1.4 ounces) each month from licensed pharmacies as long as they are Uruguayan residents over the age of 18 and registered on a government database that will monitor their monthly purchases.

When the law is implemented in 120 days, Uruguayans will be able to grow six marijuana plants in their homes a year, or as much as 480 grams (about 17 ounces), and form smoking clubs of 15 to 45 members that can grow up to 99 plants per year.

Registered drug users should be able to start buying marijuana over the counter from licensed pharmacies in April.

"We begin a new experience in April. It involves a big cultural change that focuses on public health and the fight against drug trafficking," Uruguay's first lady, Senator Lucía Topolansky, told Reuters.

Uruguay's attempt to quell drug trafficking is being followed closely in Latin America where the legalization of some narcotics is being increasingly seen by regional leaders as a possible way to end the violence spawned by the cocaine trade.

Rich countries debating legalization of pot are also watching the bill, which philanthropist George Soros has supported as an "experiment" that could provide an alternative to the failed U.S.-led policies of the long "war on drugs."

The bill gives authorities 120 days to set up a drug control board that will regulate cultivation standards, fix the price and monitor consumption.

The use of marijuana is legal in Uruguay, a country of 3.3 million that is one of the most liberal in Latin America, but cultivation and sale of the drug are not.

Other countries have decriminalized marijuana possession and the Netherlands allows its sale in coffee shops, but Uruguay will be the first nation to legalize the whole chain from growing the plant to buying and selling its leaves.

Several countries such as Canada, the Netherlands and Israel have legal programs for growing medical cannabis but do not allow cultivation of marijuana for recreational use.

Last year, the U.S. states of Colorado and Washington passed ballot initiatives that legalize and regulate the recreational use of marijuana.

Uruguay's leftist president, Jose Mujica, defends his initiative as a bid to regulate and tax a market that already exists but is run by criminals.

"We've given this market as a gift to the drug traffickers and that is more destructive socially than the drug itself, because it rots the whole of society," the 78-year-old former guerrilla fighter told Argentine news agency Telam.

Uruguay is one of the safest Latin American countries with little of the drug violence or other violence seen in countries such as Colombia and Mexico.

Yet one-third of Uruguay's prison inmates are serving time on charges related to narcotics trafficking that has turned Uruguay into a transit route for Paraguayan marijuana and Bolivian cocaine.

Even though it is set to clear the Senate, the legislation faces fierce opposition from conservatives and Mujica has yet to convince a majority of Uruguayans that it is a good idea.

According to a recent opinion poll by Equipos Consultores, 58 percent of Uruguayans oppose legalizing pot, although that is down from 68 percent in a previous survey in June.

Critics say legalization will not only increase consumption but open the door to the use of harder drugs than marijuana, which according to government statistics is used by 8 percent of Uruguayans on a regular basis.

"Competing with drug traffickers by offering marijuana at a lower price will just increase the market for a drug that has negative effects on public health," said Senator Alfredo Solari of the conservative Colorado Party.

If it works, the legislation is expected to fuel momentum for wider legalization of marijuana elsewhere, including the United States and in Europe. Decriminalization of all drug possession by Portugal in 2001 is held up as a success for reducing drug violence while not increasing drug use.

"This development in Uruguay is of historic significance," said Ethan Nadelmann, founder of the Drug Policy Alliance, a leading sponsor of drug policy reform partially funded by Soros through his Open Society Foundation.

"Uruguay is presenting an innovative model for cannabis that will better protect public health and public safety than does the prohibitionist approach," Nadelmann said.