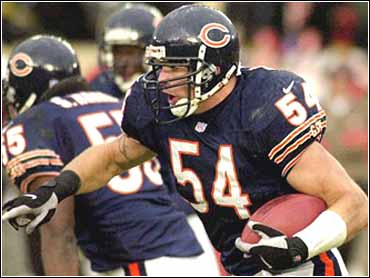 From an early season benching to top rookie is an improbable climb. Brian Urlacher of the Chicago Bears did it and was selected The Associated Press NFL Defensive Rookie of the Year.

Urlacher, the ninth overall pick from New Mexico in last April's draft, easily won the award in balloting by a nationwide panel of 50 sports writers and broadcasters who cover pro football. The middle linebacker, who received 27 1/2 votes, didn't expect it to happen, particularly after his NFL career got off to a rough start when he was tried on the outside.

"You only get a chance to win rookie of the year once. ... It means a lot," Urlacher said. "I didn't know what to expect coming into this year, then I started out so bad with training camp, and it was frustrating. But they saw something and moved me to middle linebacker.

"I think I got better and better as the season went on."

He clearly did, finishing with team-leading totals of 125 tackles, 99 solo, and eight sacks for the underachieving Bears (5-11). He also had two interceptions and a fumble recovery.

From sideline to sideline, Urlacher was as active as such All-Pros as Ray Lewis and Derrick Brooks. He also was strong as a pass defender, a skill he owes greatly to also playing safety in college.

"It's amazing, I'm so happy," said Urlacher, who joined tackle Wally Chambers (1973) and safety Mark Carrier (1990) as Bears players who won the award. "I was sure I wouldn't get it because we didn't have a very good record. I guess not. I guess I played well enough."

Urlacher's most memorable game probably came at Buffalo, where he was in on 16 tackles. It was then that comparisons to Dick Butkus and Mike Singletary began surfacing.

Such comparisons might be premature, but Urlacher likes the idea that he is grouped with such diligent players.

"I've been brought up that if you want to get something, you're going to have to work for it," said Urlacher, who became a father Dec. 13. "There's no other way to get it. No one's going to give you anything. That's just the way I live my life."

His work impressed the opposition all season.

"You can start writing his name on your ballot and no one will ask for a recount," Al Groh, the departed New York Jets coach, said. "He will be one of the more exciting players in the league for a long time."

Urlacher was one of four players to get votes. New Orleans end Darren oward was next with 15 1/2, followed by Philadelphia tackle Corey Simon with six and Cleveland end Courtney Brown - the top overall pick in the 2000 draft - with one.