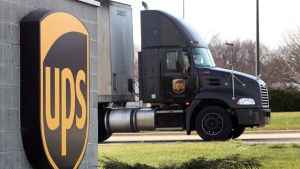 (CBS) HOUSTON - A UPS delivery man is under arrest after a Houston family's home surveillance camera caught him stealing a Christmas package from their doorstep, CBS affiliate KHOU reports.

Al and Sandra Alverson were expecting two Christmas gifts to be delivered on Wednesday, but when they got home, one of them - containing an iPad mini - wasn't there. They thought it was strange because Federal Express emailed them a notification confirming the package had been dropped off earlier that morning, the station reports.

Sure enough, at 9:39 a.m. he saw Federal Express drop off the package, containing the iPad he planned on gifting to his daughter.

As he continued to search the video, he saw a UPS worker arrive at 1:15p.m. and drop off the second package they were expecting. But, two minutes after dropping off the package, the UPS employee returns.

The video shows the driver returning and taking the FedEx package containing the iPad.

The Alversons told KHOU they contacted UPS but weren't getting any answers, so they decided to post the video on YouTube.

After the video gained some attention, Alverson told the station he got a phone call from UPS and they sent him a replacement iPad right away.

UPS told KHOU that they identified the employee and fired him. They also confirmed that the man was arrested Thursday by the Harris County Sheriff's Office and charged with theft.