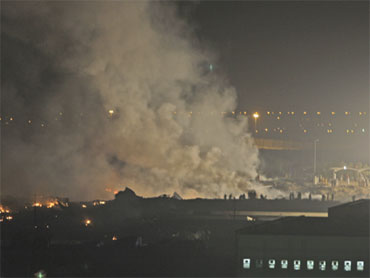 A UPS cargo plane with two crew members on board crashed shortly after takeoff Friday outside Dubai, officials said. Reuters reports that authorities said the bodies of the two crewmembers were recovered.

The plane went down inside an Emirati air base near a busy highway intersection about 10 miles southeast of Dubai's international airport. The state news agency WAM reported the crash occurred in an unpopulated desert area, suggesting there may not have been casualties on the ground.

"This incident is very unfortunate and we will do everything we can to find the cause," UPS' airline and international operations manager Bob Lekites said in a statement. "Our thoughts go out to the crew members involved in the incident and their families."

A Dubai-based spokesman for the General Civil Aviation Authority, Ismail al-Baroushi, said an investigation was under way, but it was "too early to speculate" on the cause of the crash. National Transportation Safety Board spokesman Ted Lopatkiewicz also said the U.S. agency will send a team of experts to Dubai to assist with the investigation.

Smoke rose from the crash site, which was shielded from the highway by walls. Migrant laborers from a nearby camp gathered along the roadside to watch.

A witness, who refused to give his name, said he was sitting on the balcony of his home when he heard a "big boom."

"There was fire and too much smoke," he said.

Emirati regulators have banned the plane's Sudanese owner, Azza Transport, from operating in the country.

There are about 300 747 freighters in service, carrying about half the world's air cargo.

UPS planes have been involved in four accidents since 1985, none of them fatal, according to an aviation safety database. The most recent involved a fire that broke out in the cargo hold of a McDonnell Douglas DC-8 en route from Atlanta to Philadelphia. Smoke was billowing from the plane when it landed, but the three pilots were able to evacuate safely, said the database, maintained by the Flight Safety Foundation of Alexandria, Va.

In 2005, pilot error caused the nose gear of a McDonnell Douglas MD-11F to collapse during a landing in Anchorage, causing $10 million to the plane.