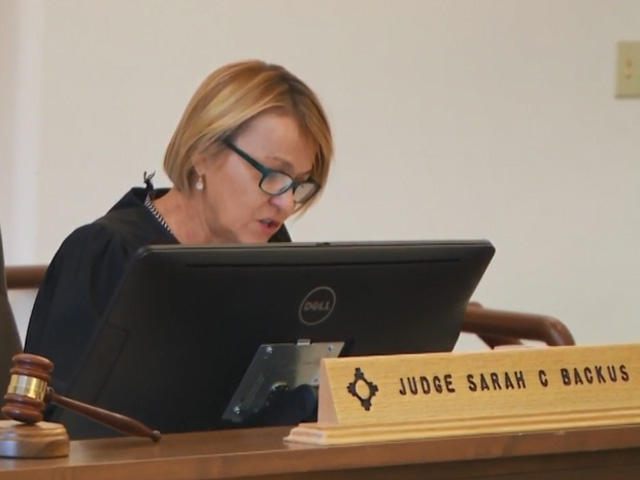 TAOS, N.M. -- A judge's decision to allow the release of an extended family accused of child abuse at a ramshackle desert compound in New Mexico prompted a political uproar Tuesday by prominent Republican lawmakers. The controversy was stoked even further when court officials condemned threats of violence made against the judge who issued the ruling and evacuated several administrative court offices as a precaution.

Administrative court officials say State District Court Judge Sarah Backus was the target of threats via social media, email and telephone. One caller to the district court in Taos made a death threat, said Barry Massey, a spokesman for the Administrative Office off the Courts.

The station describes the protective measures that were taken as the Taos County Courthouse being placed on lockdown by the Sheriff's Department due to the threats against Backus. No one was allowed to enter the courthouse all afternoon long, KRQE says.

Backus cleared the way Monday for the release of four defendants, despite assertions by prosecutors that the group was training children to use firearms for an anti-government mission and should remain in jail pending trial.

The father of a severely disabled boy who was kidnapped in Georgia will not be released because an arrest warrant has been issued for him in that state.

Another defendant, Jany Leveille, was taken into custody by U.S. Citizenship and Immigration Services on Tuesday, Taos County Sheriff Jerry Hogrefe announced. The 35-year-old native of Haiti is the mother of six children taken into state custody during the compound raid.

Eleven children were taken into custody at the squalid compound near the Colorado border during an Aug. 3 raid by authorities who returned three days later and recovered the body of a small boy.

Backus, an elected Democrat, said her decision to grant release to house arrest, with conditions such as wearing ankle monitors, was tied to recent reforms of the state's pre-trial detention system that set a high bar for incriminating evidence needed to hold suspects without bail.

Backus said Monday the state failed to provide evidence backing up key allegations in the case.

"The state alleges that there was a big plan afoot but the state hasn't shown to my satisfaction and by clear and convincing evidence what that plan was," Backus told the courtroom, noting that none of the defendants has a criminal record.

Initiated by a statewide vote in 2016, New Mexico's bail reforms are modeled after similar changes made in New Jersey and under consideration in California that reduce the role of money as a means of ensuring court appearances or making release impossible for potentially dangerous suspects.

New Mexico Gov. Susana Martinez, a former district attorney, said Tuesday she "strongly disagreed" with the judge's decision and renewed her criticism of rules for pre-trial detention that are determined in part by the state Supreme Court.

"You have a person who is training kids to shoot up schools, they have a compound that is like a third-world country," State Republican Party Chairman Ryan Cangiolosi said. "There's a child's body on the compound - I believe that allowing them to be released is absurd."

Medical examiners have yet to determine conclusively whether the body found at the compound outside Amalia was that of Abdul-ghani - the missing son of compound resident Siraj Ibn Wahhaj. Other relatives have said or told authorities that the remains are those of Abdul-ghani.

Prosecutors presented evidence that Siraj Ibn Wahhaj provided some of the children with firearms training, including tactical skills such as speed-loading guns and firing while in motion. Along with rifles, handguns and ammunition, authorities say they found books on being effective in combat and building untraceable assault-style rifles.

Backus, however, said prosecutors failed to articulate any specific threats or plan against the community.

She also pressed prosecutors for evidence to support allegations that the children were starving at the compound.

Agency Director Artie Pepin stressed that the judge's responsibility is to make decisions based on evidence and "not popular sentiment that may develop from incomplete or misleading information."

Suspect Siraj Ibn Wahhaj will remain in jail pending a warrant for his arrest in Georgia issued over accusations that he abducted his son, Abdul-ghani, from the boy's mother in December and fled to New Mexico.

Three other defendants -- Lucas Morton, Subhannah Wahhaj and Hujrah Wahhaj -- had yet to be released Tuesday.

Attorneys for those four defendants say volunteers have come forward to provide a suitable place for them to live as legal proceedings move forward.

Backus set bail at $20,000 with no up-front deposit -- just a threat of a fine if defendants break condition of their release.

Court testimony Monday by an FBI agent shed light on the fate of the boy whose body was found.

Agent Travis Taylor said a 15-year-old resident of the compound described attempts to cast demonic spirits the child through a ritual that involved reading passages from the Quran while Siraj Ibn Wahhaj held a hand on the boy's forehead.

The boy apparently died after one of the sessions, Taylor said.