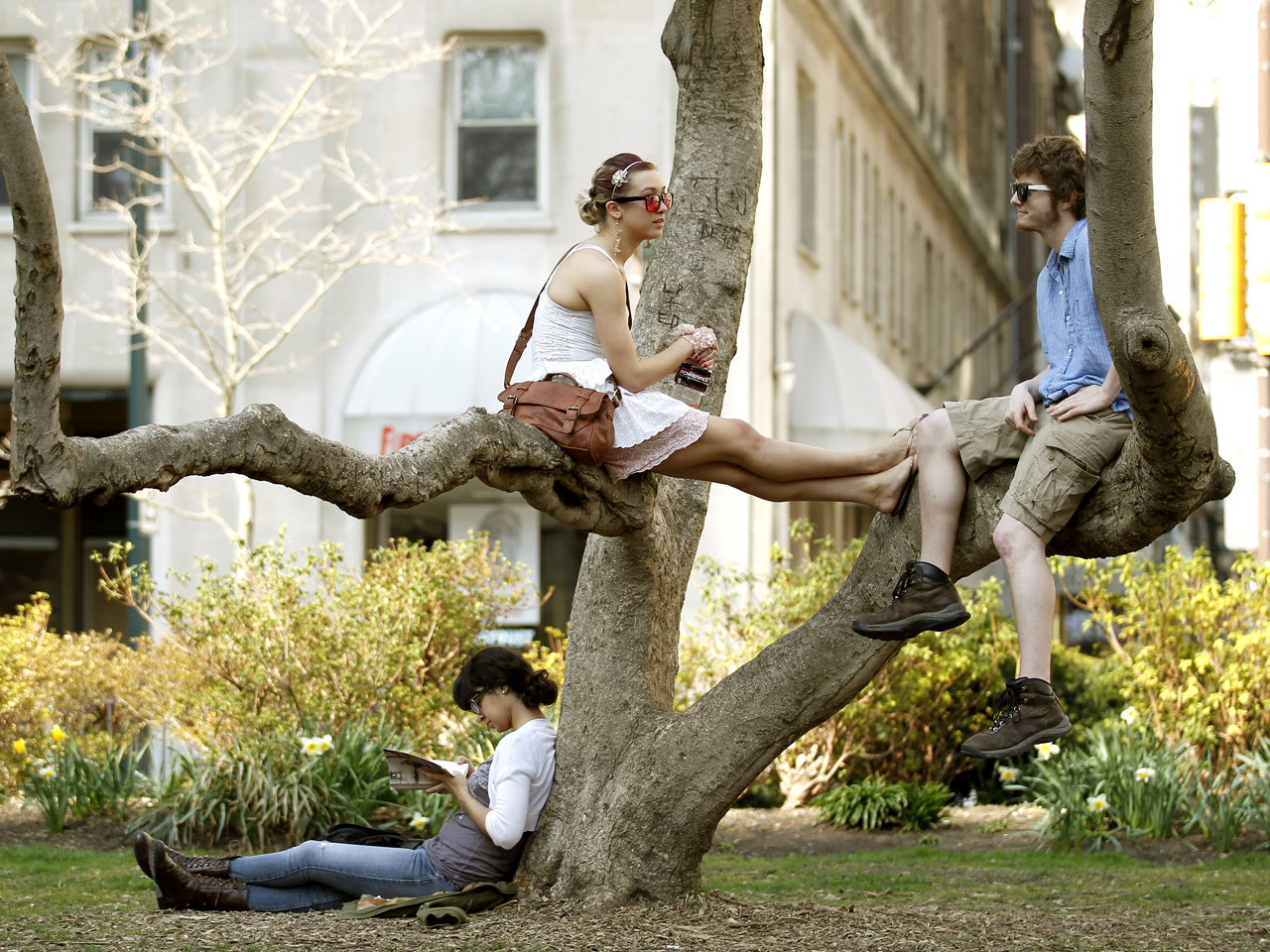 CHICAGO - Break out the beach towels, flip-flops and baseball bats: Warm weather is arriving early across much of the U.S., even in northern states where perplexed residents are swapping their snow shovels for golf clubs.

The unseasonably warm weather was pushing throngs of people outside to play Tuesday from the Plains to New England, where March is feeling like May with temperatures ranging from the high 60s to low 80s — smashing dozens of record highs.

Boaters were cruising along the river in downtown Chicago amid one of Illinois' warmest winters on record. Golfers were smacking balls at a central Minnesota course that opened weeks earlier than last year.

And an ice-breaking mission on Maine's Kennebec River on Tuesday was the shortest in recent memory — because the Coast Guard found no ice.

"It's almost like we skipped winter and now we're going to skip spring, too," said Gino Izzi, a senior meteorologist at the National Weather Service's Chicago office.

Forecasters are predicting that temperatures will likely remain unusually high through March.

Izzi said the weather pattern is a random but normal fluctuation. A jet stream moving north to south on the West Coast is pushing an opposite, seesaw effect in the rest of the nation. Atmospheric patterns, including the Pacific phenomenon known as La Nina, have kept cold air bottled up over Canada and contributed to the warmer winter in snow-accustomed parts of the continental U.S.

Another effect of rising temperatures: Americans' belief in global warming, according to a December poll that found 62 percent of people believed the Earth was getting warmer, an increase from previous polls. Nearly half of them based that belief on personal weather observations, University of Michigan and Muhlenberg College researchers found.

In Minnesota, golfers were greeting the sunshine at the Eagle Valley Golf Course in suburban St. Paul that opened Tuesday — weeks earlier than last year's chilly, soggy spring start. Within an hour of its post-lunch opening, dozens of players were on the course, head golf pro Dan Moris said.

"We're hoping this is a sign of good things to come," Moris said.

The ice rink was empty at Chicago's iconic Millennium Park, where crowds were instead strolling and admiring the reflection of the skyline in a large, mirror-surfaced sculpture known as the Bean.

Nearby, new city residents Katie and Chris Anderson left work early to spend their second wedding anniversary on a tennis court. They said they were surprised by the weather because of Chicago's legendary cold winter.

"I was really nervous about moving here," Katie Anderson said. Her husband added: "We expected the worst."

In Boston, pedestrians traded puffy jackets and knit hats for short sleeves. At a tanning salon in the city's Seaport District, a pair of flip-flops sat in front of one tanning booth, and a pair of sneakers rested by another.

"Everyone definitely has spring fever," employee B-Jay Angiulo said, adding that it was a good sign for business that two of the six tanning booths were full before 5 p.m. "I think the sun's out so people want to get a little spring color going on."

In Tennessee, where temperatures since December have been 4 degrees above normal, tourism officials said the weather should help their industry, including the Great Smoky Mountains National Park, country music attractions in Nashville and Elvis Presley's Graceland home in Memphis.

"People get out when the weather is nice," said Susan Whitaker, the state's tourism commissioner.

In downtown Washington, most of the benches at a local park were filled with people enjoying the weather. Taylor Jantz-Sell, a government employee, had brought some reading she needed to do to the park.

"This is my favorite time of year, watching the blossoms come out," she said, adding that she'd seen daffodils and crocuses, and ran to work Tuesday morning because of the weather.

"It's a sign of good things to come," she said.