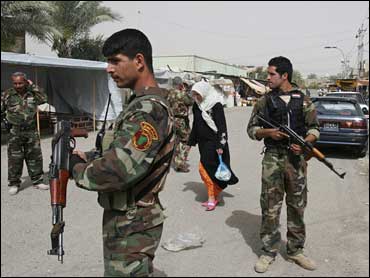 Sunni security volunteers who turned against al Qaeda complained Saturday the Iraqi government has not paid them in months, with some threatening to quit a movement widely credited with helping turn the tide against insurgents.

The issue of how to deal with the groups, whose ranks include former insurgents, is a test of the Shiite-led government's ability to win the loyalty of disaffected Sunnis - an essential step in forging a lasting peace in Iraq.

Last October, the Iraqi government assumed responsibility for paying the more than 90,000 security volunteers, known variously as Sons of Iraq or Awakening Councils, and bringing some of them into the army and police.

The U.S. had been paying them since they began turning against al Qaeda in 2006, joining forces with the Americans to hunt down extremists.

"We have not received our salaries in two months," said Ahmed Suleiman al-Jubouri, a leader of a group that mans checkpoints in south Baghdad. "We will wait until the end of April, and if the government does not pay us our salaries, then we will abandon our work."

Similar complaints were also raised by Sons of Iraq groups in Azamiyah, a former al Qaeda stronghold in north Baghdad, and in Diyala province near the capital.

"The fighters in Diyala haven't been getting paid since three months ago," said Khalid Khudhair al-Lehaibi, leader of the volunteers in the province. "We appeal the government to pay our salaries, and if they won't, we will organize demonstrations and sit-ins in the province."

Efforts to contact a government spokesman were unsuccessful because offices are closed on weekends.

However, al-Jubouri said officials told him that the delay was due to red tape after responsibility was transferred from the Ministry of Defense to the Ministry of Interior.

Sabbar al-Mashhadani, a Sons of Iraq leader in Azamiyah, said the government had given assurances that "we are still on the payroll" and the problem will be solved "in the coming few days."

The Iraqi government has problems paying many employees, including soldiers, police and schoolteachers due to bureaucratic problems and inefficiencies.

But the issue is particularly sensitive for the Sons of Iraq because of deep distrust between the Sunnis and the Shiite-dominated government, which considers many of the fighters as enemies who switched sides for money and who may well turn their guns on the Shiites again.

On Saturday, police arrested the head of a Sons of Iraq group in central Baghdad and his aide for alleged involvement in terrorism. The arrest triggered a gunfight that killed four people - three civilian bystanders and a policeman - and wounded 10 other people, police said on condition of anonymity because they were not supposed to release the information.

Under pressure from the U.S., the government agreed to accept 20,000 of the fighters into the police or army and continue paying the rest until they could find them civilian jobs.

But U.S. officials say the process has been slowed because the drop in world oil prices has cut deeply into the government's revenues, prompting a freeze on army and police recruiting.

The Iraqi government is to assume responsibility for paying the last 10,000 volunteers still on the U.S. payroll on April 1.

Also Saturday, a senior aide to Prime Minister Nouri al-Maliki confirmed that contacts were under way to win the release of five Britons taken hostage in May 2007 but denied Arab media reports that deal had been finalized.

The widely read Saudi-owned news Web site Elaph quoted a leader of the Shiite extremist group Asaib Ahl al-Haq, or League of the Righteous, as saying one of the five Britons would be freed "very soon" in exchange for 10 of its members.

If that exchange goes according to plan, the other hostages would be released in stages in exchange for the freedom of more detained Shiites. The first group of detainees would include Laith al-Khazali, brother of the league's founder Qais al-Khazali, Elaph said.

The final exchange would free Peter Moore, an information technology consultant, in exchange for Qais al-Khazali and Ali Moussa Daqduq, a Lebanese Hezbollah commander who was captured in Iraq in 2007, the Web site reported.

Moore and four of his security guards were seized by gunmen in police uniforms from the Finance Ministry.

Last week, the British Embassy confirmed receiving a hostage video but refused to say who appeared on it. The BBC said it was Moore, who had appeared in an earlier video shown on Feb. 26, 2008.

The league is a splinter group from the Mahdi Army militia loyal to radical Shiite leader Muqtada al-Sadr. The U.S. believes the group is backed by Iran, a charge the Iranians deny.